The cheese production of the Alpage

Alpine cheeses were traditionally made in remote regions of the mountains in eastern France, where large collective herds were moved to the alpage (mountain pastures) in May/June and remained through the middle of September each year. The cheeses needed to be large enough to accommodate the large amount of milk as well as sturdy enough to withstand the rigors of travel to the valley markets. Each region developed it's own unique style due to herd sizes, remoteness and local preferences.

These cheeses were produced in the primitive mountain chalets where the cows grazed. Sometimes a particular herd would have 2-3 chalets located at different levels on the mountain as the cows moved during the summer and the vats would be moved with the herd. The cheeses were collectively referred to as Gruyere. The Gruyere of old being the assigned person who monitored the grazing activity and assessed the taxes for these Alpage areas. Specific cheeses such as Abondance, Comte, Beaufort, Ementhaler, and Morbier are good examples. The Abondance and Beaufort are the current remaining examples of traditional Alpage production, whereas the others are now produced in Valley cooperatives with the milk being transported.

In November of 2008, the Vermont Institute of Artisan Cheese making at UVM brought two of the top French Alpine Cheese specialists from Poligny France (French National Institute for Agricultural Research <INRA>) for a very special workshop exploring several of the Alpine Cheeses of France. Dr Eric Beuvier's (director of the Research for Dairy Technology and Analysis) whose focus has been the microflora of raw milk relating to sensory quality in these traditional cheeses and Gabriel Duboz (Gabe), has been responsible for the experimental research production of these Alpine cheeses. Eric led us through the technical aspect of these cheeses in the classroom and Gabe was our leader in the hands on making of these cheese. They were both assisted by Marc Druart and Dr. Montse Almeda from UVM. This was one fabulous team of experts to lead us through the history, background and making details of these Alpine cheeses. The class itself was made up of some of the top artisan cheese makers in the country. All in all, these were 3 informative days for cheese makers.
Comte, Abondance, and Morbier were the focus of study for the comparison and contrast of process. These three very similar cheeses with differing moisture and aging profiles were explored in detail both in the class room and cheese lab.

Our Tech Advisor, Jim Wallace attended and brings us this update on the workshop and process. Also take a look at the Beaufort process he offers from this session.

The focus for this workshop was the comparative process of 3 Alpine style cheeses. The processes being very similar but with variations in final moisture. Marc (1st center) and Gabe (2nd center) lead us through the 3 day session with detailed recipe notes and plenty of hands on control points. There is much discussion among the group. 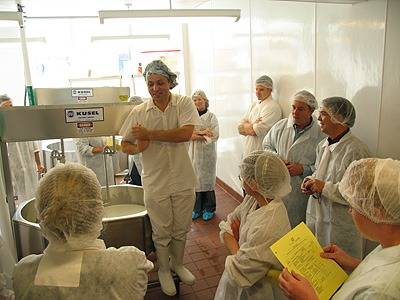 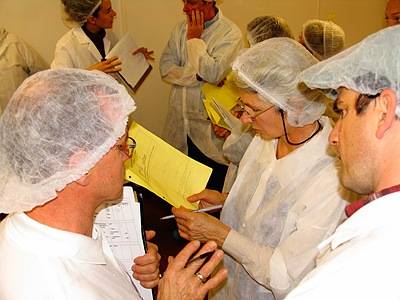 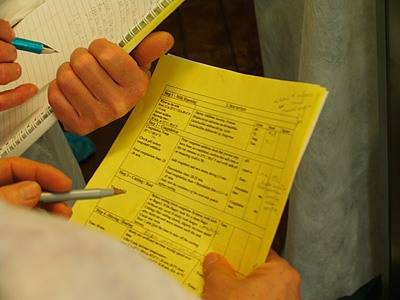 Here we have the undivided attention of Montse and Mark Fisher (Woodcock Farm) as Marc and Gabe lead us through the inoculation, ripening, and coagulation phases, pointing out the qualities in texture and firmness to look for in the curds before the initial cut. 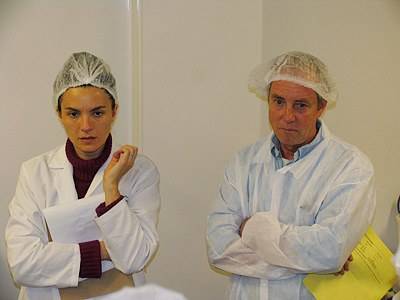 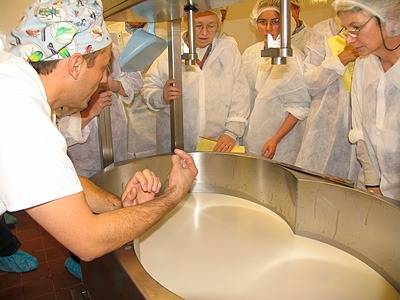 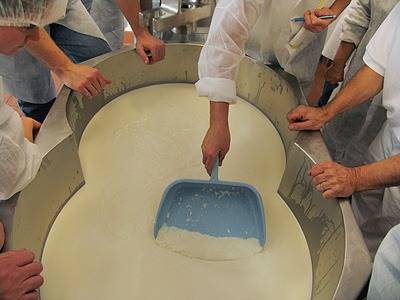 This next phase is the cut, stir, and scalding to produce the critical moisture of the cheeses. As you can see here a great deal of emphasis is placed on the time and size of cutting, the temperature of stirring, and pH development. All of these are major factors in developing te final moisture and texture for the cheese development. 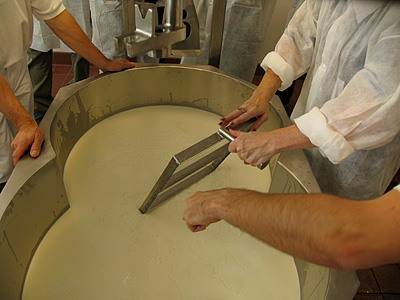 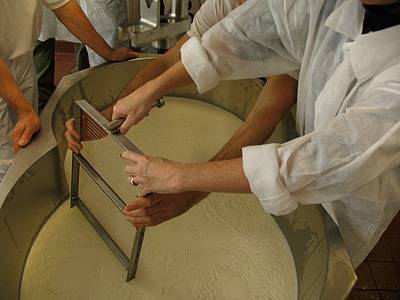 Final curd evaluation is one of the most critcal points in any cheese making process and here Gabe is making sure we all understand what this final point should be. This is the point in cheesemaking where words do not suffice. To become a good cheese maker it is the hands on aspect and experience that produces consistant cheese.Once the 'cheddaring' is completed, the curd will be broken into smaller bits, salted, and placed into cloth 'bandages' in hoops. The blocks are cut again and stacked into a very compact mass that will begin to stretch out under its own weight. This is the 'cheddaring' process that give the cheese its typical texture. These are then placed in a press and is pressure applied until ready for the aging rooms. 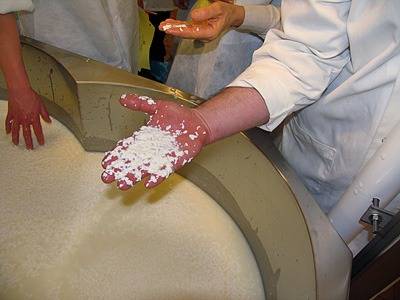 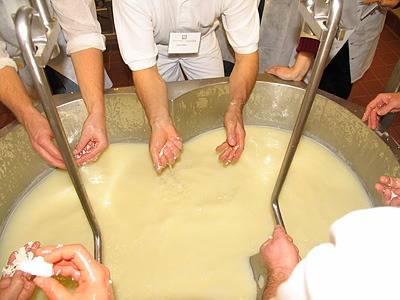 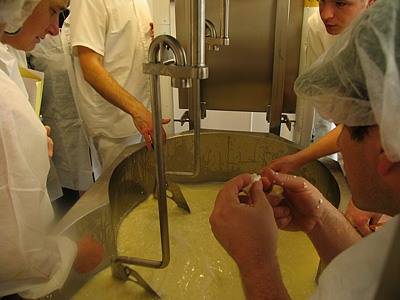 The curd gathering is another important step in itself because of it's low final moisture. It is important that the curds are gathered and consolidated in the whey to eliminate the potenial of mechanical openings in the final cheese, as opposed to gas holes produced internally by the process. 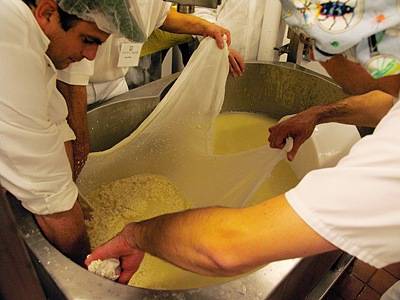 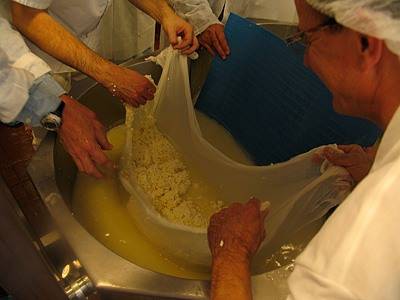 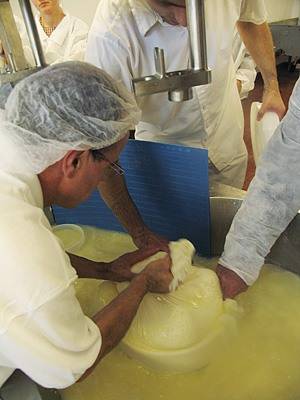 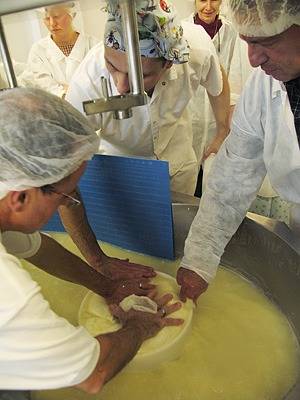 Once gathered and in the molds, the curds are pressed. They are kept warm at this point to keep the culture active because little acidity has been produced and it is in the overnight time on the press bed that the final acid is produced. This is very important since it is the late acid production that allows the cheese to achieve the very elastic texture that is one of the primary defining characters. 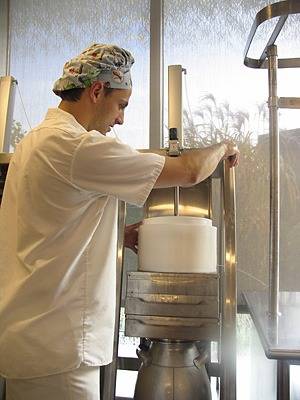 The next day, Gabe pulls the cheese from the press for a final evaluation as well as reviewing the acid profiles that were recorded as the pocess evolved. He explains how this will indicate how well the process went and whether we can expect problems in aging. 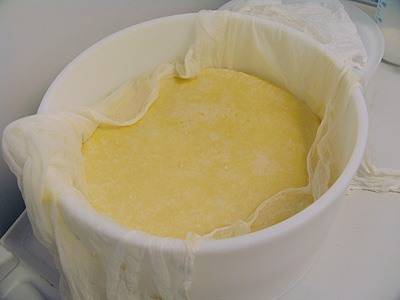 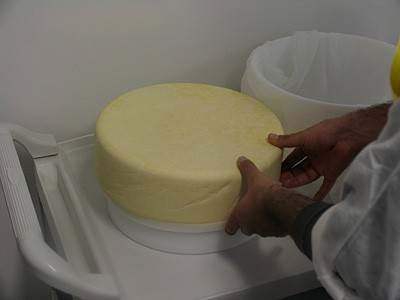 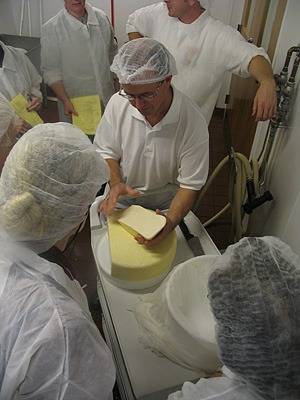 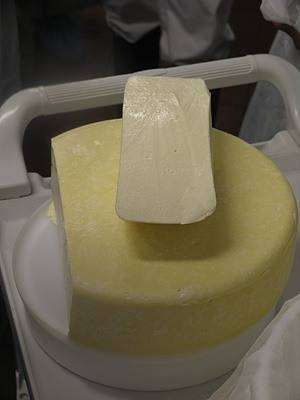 As in all of the other programs held at VIAC, the cheese evaluations are an important part of it all. Here, the attendees bring cheese for critical evaluation. Montse Alameda (UVM) is one of the best in her field in this type of evaluation and Mateo Kehler (Jasper Hill Farm) discusses the evaluation of some of his cheese. 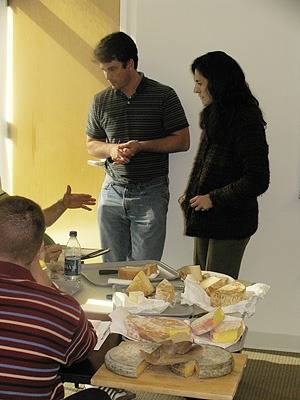 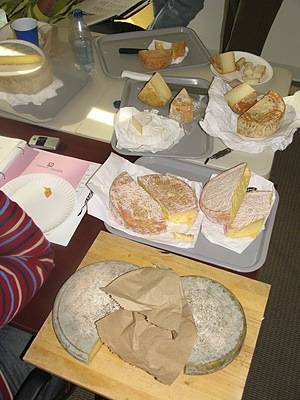 One of the unexpected surprises for this session was the appearance of Sister Noella (the cheese nun). As it turned out Dr. Beuvier was her advisor for her doctoral study. She is today one of the world experts on surface ripening. Of course she brought several samples of what to expect (or not) in rind development 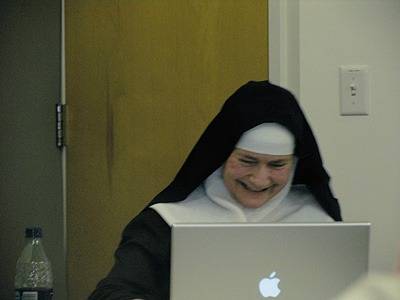 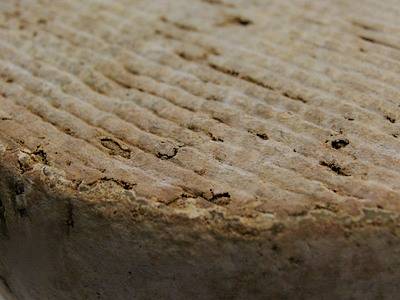 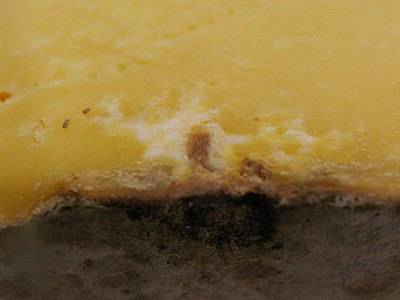 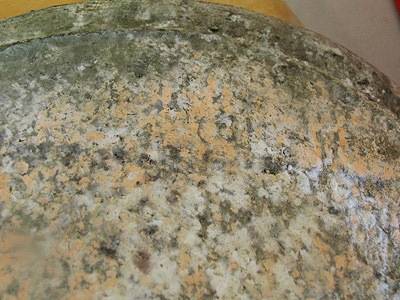 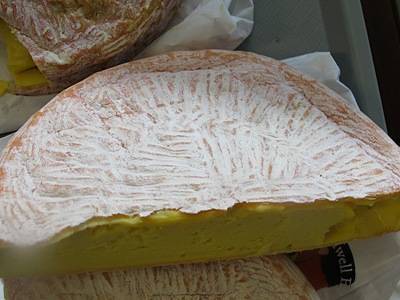