In this recipe we will explore this cheese that has been made for over 700 years in the mountains of Switzerland.

The very beautiful mountains of the eastern part of Switzerland.

This one is a moister version of the Alpine style that has been made for centuries.

The most unique aspect however, is the treatment of the rind during aging, which has become their biggest marketing tool as well. During the aging, the rind is rubbed with a "SECRET" blend of yeast, alcohol, and a combination of 25 different herbs, roots, leaves, petals, seeds, and bark.

Since we don't live in the Appenzell region, and we wont be making their cheese, we can take the basic concepts and create our own version of this wonderful cheese.

This months Appenzeller can definitely go into the SCIENCE/CULINARY project category.

Even if you have no intention of making it, it's a GREAT STORY and a lot of fun. 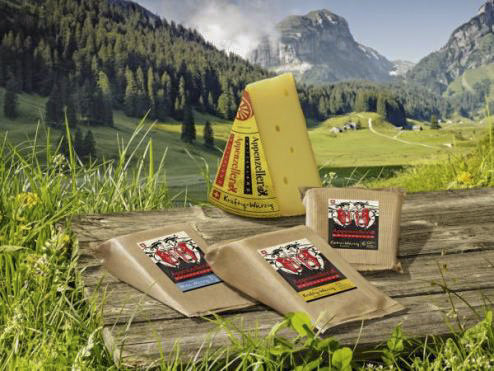 The History of Appenzeller

The making of Appenzeller has been taking place in this region for more than 700 years. The thick forests of Appenzellerland were cleared around the eighth century in order to make space for settlements and cattle breeding.

In the year 1069, the abbey of St. Galen built a settlement called Abbacella, from which the current name of Appenzell is derived.

The hard cows milk cheese, Appenzeller, known for its spicy undertones, was first mentioned in documents dating from the year 1282, when the people of Appenzell used the cheese they produced as a tithe to the church, thus giving it to the monks at the Abbey of St. Galen.

The mountains of this area of Switzerland are abundant with herbal meadows, and at some point the producers imagined these ingredients for the brine used, as well as a continued rub on the rind surface as it aged. 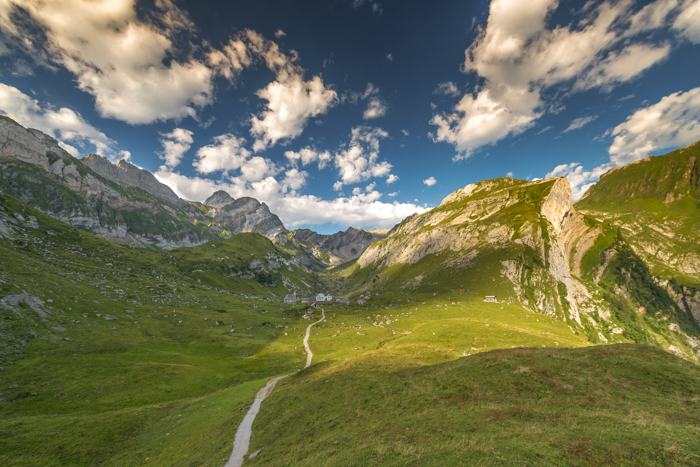 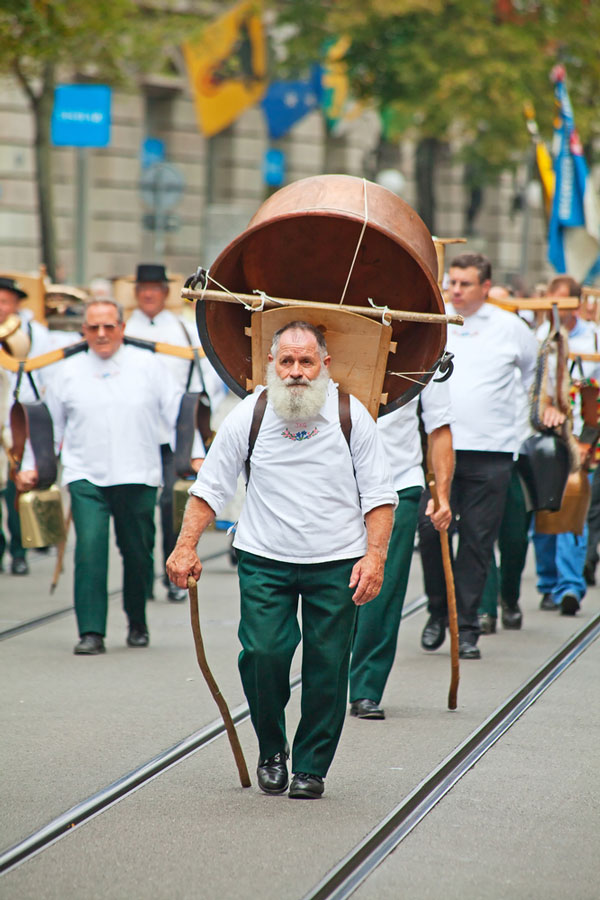 What Makes Appenzeller so Unique

The Appenzeller comes from the mountains at several different ages, from 3-4 months to a year and longer. The fresh ones tend to be more supple, with a bit more sweetness. As the cheese ages, it will develop a more nutty flavor, and the aromas and flavors from the herbal wash become more notable. The rind can vary from a brownish to orangish layer, and becomes thicker as it ages.

The interior will vary from quite creamy and supple when young, to a less flexible and drier character as it ages. At any age, it is a great cheese, but initially I suspect you will have a hard time waiting long enough to see the variations.

The finished cheese may have a few small round holes, or be without holes, depending on local bacteria in the milk and the temperature of the aging room.

Even though the Appenzeller Group takes great care in trying to produce the same cheese, some seasonal and regional variations defy standardization. In my mind, it's a good thing not knowing totally what you will get when you cut into it.

Why is this cheese considered to be so special?

How come we didn't know of this cheese before now?

However, things are changing and Appenzeller is now a hot topic on the world's cheese boards. 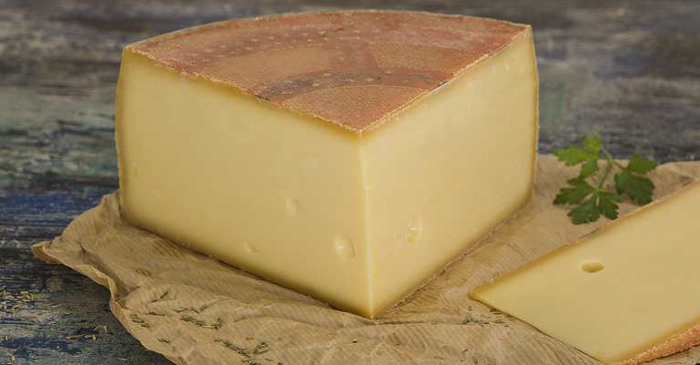 The one thing that makes this cheese most unique is the liquor made from the local herbs and roots, and the yeast from the local wines. This is all incorporated into a liquid that is rubbed on the surface frequently during aging. This eventually permeates the cheese, leaving a wonderful aroma and flavor unique to the cheese.

As I have already mentioned, the exact mix for this is top secret and locked up, the formula only known to a select few.

However, this should not deter us and our imagination. I have made my own combination with a selection of flavor/ aroma components, plus the yeast muck from my recently fermented ciders, which is quite aromatic on its own.

The first thing was to select the herbs/spices/woody components. Where to begin?

I did a bit of research on the web as to what grows in the mountains, as well as on some of the mountain bitter concoctions available commercially.

Now I tend NOT to keep things secret, so here is what I used to make the liquor for the rub (the units are grams):

I infused this into about 4 oz. neutral alcohol for 1 week, then strained the liquor.

I then mixed with an equal amount of my yeast mud (often called lees) from a cider I recently made.

Store this in the fridge in a sealed bottle until ready to use. Those that have tasted the infusion say that it smells a lot like the JagerMeister.

By no means am I saying this is the mix they use, but it works well enough for me and my friends that taste the cheese. 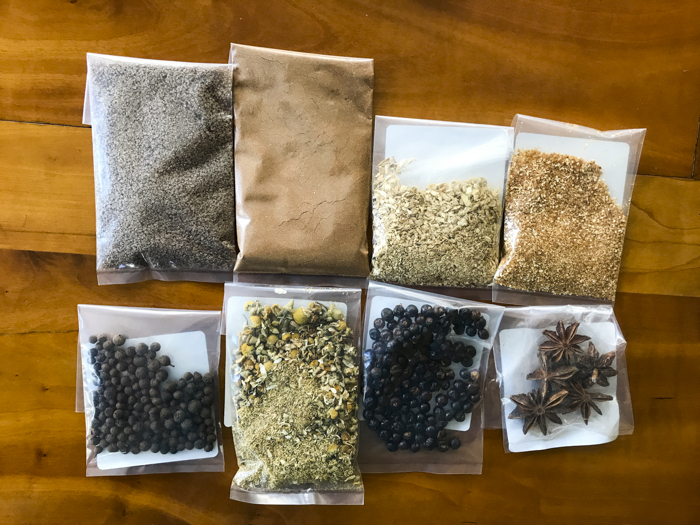 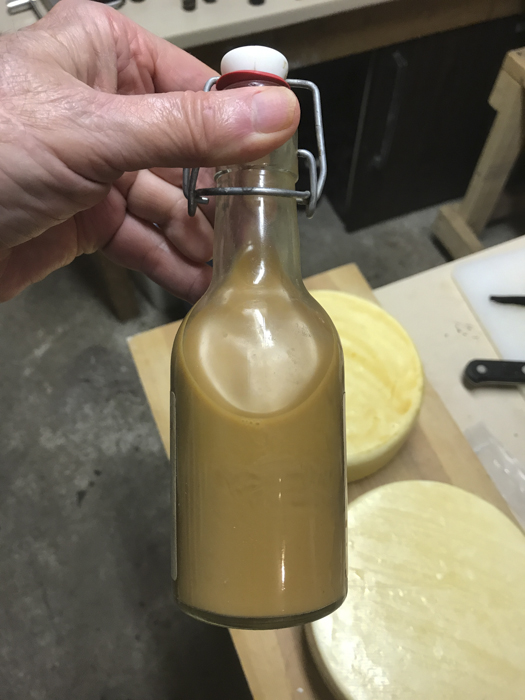