4.7 10 reviews
Print Recipe
Double and triple cream cheeses are a rather modern addition to the cheese world, most having been introduced during the early to mid 20th century. Triple crème cheeses are the result of extra cream being added to milk when making soft-ripened cheeses. Think Camembert or Brie taken to the next level! This crottin cheese mold is the perfect size for draining a variety of soft cheese including, Chevre, Fromage Blanc and Triple Creme. The height provides ample room for curds to...

A recipe for making a triple creme cheese

The cheese I make in the following guideline is made from a pasteurized milk right from the store plus heavy cream that has been ultra-pasteurized. Since the cream is mostly butterfat and water, the UP will not be a problem because most of the proteins will be provided by the milk.

What is Triple Creme

Today in America, what we call cream cheese is a far-removed descendant of the rich, creamy, fresh and briefly cured cheese known as double and triple crèmes. Originally from France, more recently they also are being produced in parts of Spain, Italy and Denmark. All are exceptionally rich and luscious and vary in style as shown here:

These cheeses vary in texture from very soft to semi-firm, and range from subtle creaminess to tangy and aggressive in taste.

Some are "unripened" with a fresh, delicate tang; those that are cured for about three weeks before coming to market develop a thin, bloomy crust.

Other triple and double crèmes are blended with a mixture of herbs and garlic or spices; still others have blue veining. Many are cow's milk cheeses. While double and triple crèmes vary in flavor and style, they all share a richness and creaminess.

Double and triple cream cheeses are a rather modern addition to the cheese world, most having been introduced during the early to mid 20th century.

Triple crème cheeses are the result of extra cream being added to the milk in making soft-ripened cheeses. Think .. camembert/brie taken to another level!

Triple crème cheeses are defined by law to have at least 75% butterfat (double-crèmes must contain between 60-74% butterfat). Brillat-Savarin, St. André and Explorateur, are the most readily recognized names of triple crème cheeses. However, there are many lesser-known cheeses such as Gratte-Paille and Pierre Robert; goat-cheeses like Can Pujol (also known as Nevat); and Brebrioux, a sheep's milk cheese, that are growing in status. 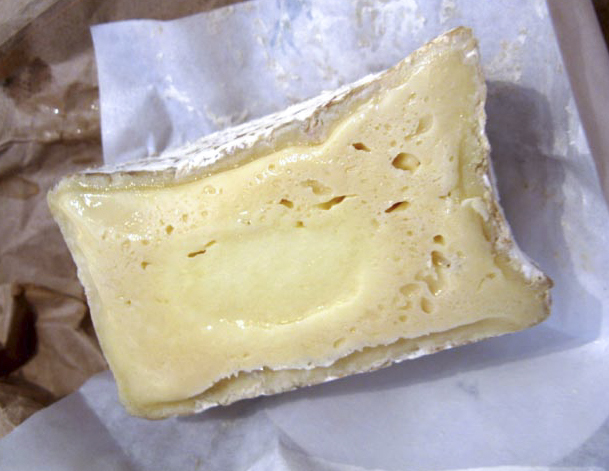 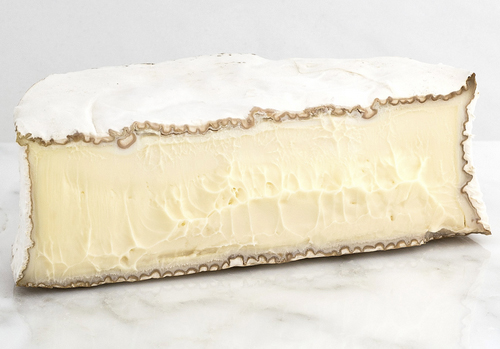 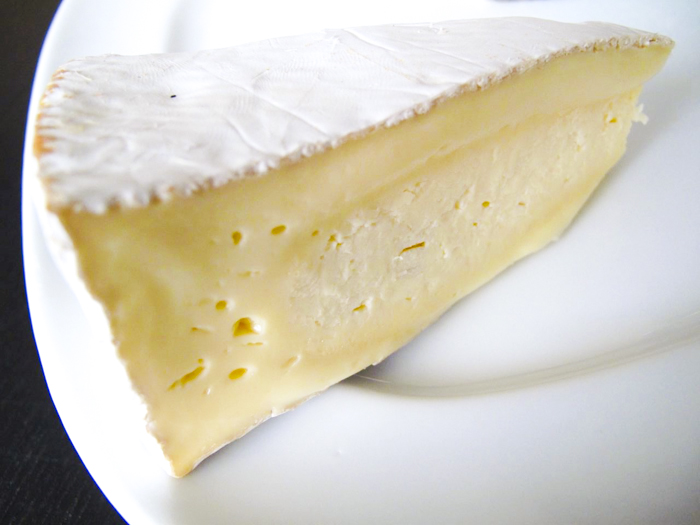 All About the Cream & Butterfat

Wait, don't panic yet. The way fat is measured in all cheese is on the basis of "fat in dry matter" or F/DM. This means that after all of the water is removed and just the solids left behind, this is how much of those solids is fat. As the water is removed, the relative percentage of fat, of course, is increased, since it is left behind in the cheese.

The primary reason for using this F/DM is actually a means to measure fat in food to help people understand just how much fat is being consumed, since water in the equation would make the percentage fat quite meaningless. The idea is to compare apples to apples here.

Therefore, in a cheese such as a high fat Brie or a double or triple cream cheese that normally has a moisture content of 45% so the actual fat level is already down to about 40% of what you are actually consuming when the moisture is factored back in.

From this, you can easily see that the milk going into the vat to make a triple creme cheese must obviously be enriched with cream (unless you are working with a ewe's milk with high butterfat already) this means adding some high butterfat cream to the milk.

For example, if a normal pasteurized milk at 3.25% were to be used to make a triple cream cheese you could use:

That same 6% becomes 75% cream when all moisture is removed. 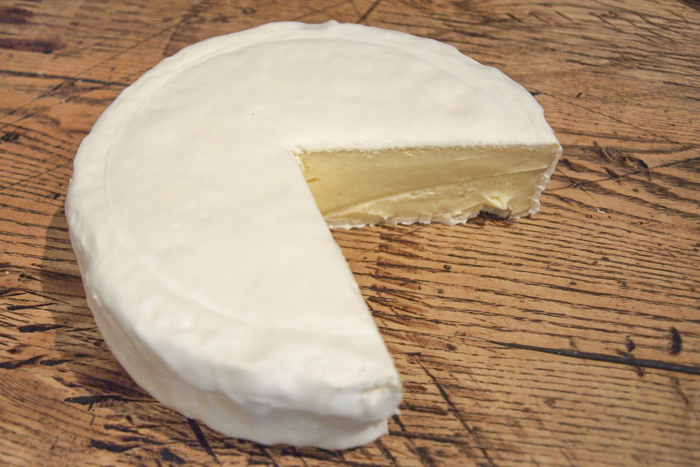 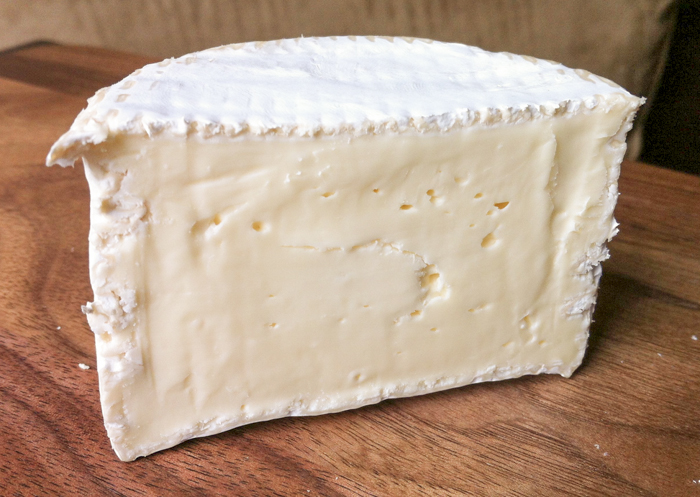 In my cheese room here, I often use a raw Jersey milk which averages about 4.8% fat for making small Bries. When I consider my yield from this milk and the final moisture, this makes a cheese of about 60% F/DM which definitely pushes it into the 'double creme' category.

But, for this recipe we are going to make things easy to get and use pasteurized whole milk from the store and some heavy cream as noted below in the guidelines. 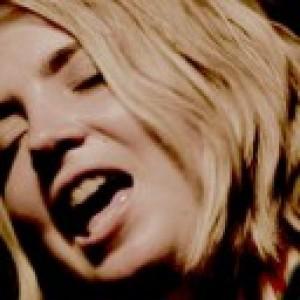 Fun and easy! Everything went according to plan, and once I got the cheeses into their plastic box, white mold started to appear after around 3-4 days. Today I finally broke into one and it’s so good! I could almost convince myself I bought it at a fancy store for $25/lb I’m letting the others continue to age in the interest of science, but I’ll definitely make this recipe again! 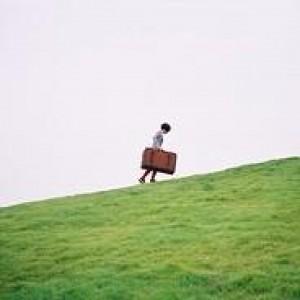 Not sure why I’ve been unsuccessful

This was the first cheese I made about a year ago. I just recently tried it again. Both times I’ve turned out curds that are dryer than I think they should be as the cheese never shapes completely to my mold. My first make I messed up the temperature on it So I thought that was the issue and this time around I was extra careful. I’ve made several more difficult cheeses since that first make and have learned a lot. Since again I got dry curds that don’t want to solidify into a smooth piece of cheese I’m pretty sure it’s the 10 minutes of stirring that’s messing me up. Maybe I’m doing it wrong but I’m pretty sure if you ladle it straight into the molds after cutting like you do with Brie or Camembert then it should work better. Not sure what all these other successful reviews did in that regard but I find it frustrating that I can master much more difficult cheeses and Brie, but not this one (twice!) and everyone else says it’s so easy.

Made these for a get together and wowed everyone. The flavor after a week was really nice and the soft fluffy little pillows were gone quickly. May have to double the batch next time. Will definitely make again!

I made this for a get together and we had it fresh. Each of us are aging another for a week or two to see the difference. Already developing a Brie-like rind and I'm interested in tasting the difference in complexity. A soft fluffy cloud that's really tasty!

This was my first aged soft cheese, and they turned out wonderful! My friends and family are all requesting I make more! They spent about 2 weeks in the cave (Part of that was drying the surface, I believe I put them in without proper surface drying after draining), and about 2 weeks in the fridge. There was a thin, somewhat gooey layer near the rind and the rest of the paste was soft and creamy. Incredible! *Note: I used another cheese ripened with Geo Cand. / P. Cand. to inoculate this batch as I did not have store-bought C7 / C8.