5 2 reviews
Print Recipe
This recipe focus on a blue cheese from The Auvergne of France, in the style of Bleu d'Auvergne. It is made from cows milk and is a creamy milder blue that is made with less salt than most other blue cheeses.

If you have some cheese making experience, you may want to give this intermediate level cheese a try. The result will be a stunning addition to your cheese board. MM 100 Mesophilic starter culture can be used to make a variety of semi ripened and fresh cheese including Brie, Camembert, Gouda, Edam, Blue, Feta, Havarti and Chevre. This culture will create a nicely pronounced... Penicillium Roqueforti (PV) is used to ripen and give flavor to a variety of blue cheese including Gorgonzola, and Stilton. This blue mold powder creates an intense blue-green marbled interior,...

A Note on Batch Size

I would recommend that you not make this cheese until you have made a few other cheeses for the experience. It really needs to be a 4-5 lb. cheese or larger to increase the ratio of curd mass to surface area needed to develop a good blue.

For a smaller version, the changes to scale down from 5 gallons to 2 gallons are listed below:

The Auvergne of France

This month we focus on a blue cheese from the Auvergne of France, In the style of their Bleu d'Auvergne. This is one of my favorite blues! It can usually be found on my lunch board when I can find it. It's made from cows milk and is a creamy milder blue. It is also made with less salt than most other blue cheeses.

This cheese originates in the Volcanic mountains of south central France, the "Massif Central."

This is the land where warm summers follow harsh winters. The rainfall is always heavy and the winter snow can fall for 2 to 5 months. The lands are mainly covered with a blanket of green, a very lush landscape producing great pastures.

It is this volcanic soil that gives the rich milk that lets Bleu d'Auvergne cheese develop all of its character.

The Auvergene is really one of the most beautiful places I have ever been. Add to that the amazing Saler and Abondance herds and their lush pastures, which are responsible for the amazing cheeses produced there,then throw in some beautiful ancient villages and wonderful food offered by some very friendly folks and it is hard to remember that I am there to work, but this cheese is what is what I came for. 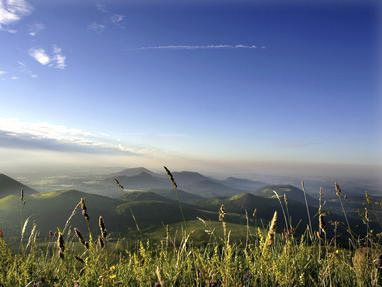 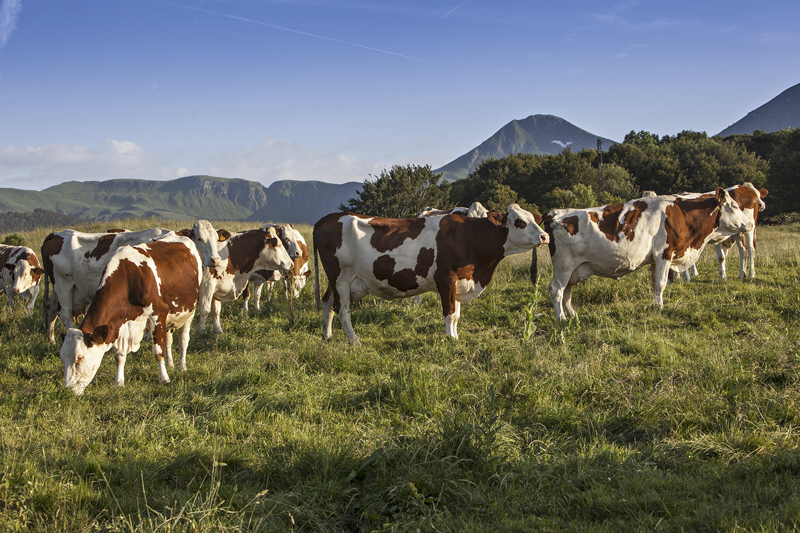 The Bleu d'Auvergne is reported to have first appeared in the mid 1850s, making it a rather recent addition to the world of French cheese. It's evolution followed a similar path to the Roquefort cheeses, but with the use of cows milk instead of ewes milk.

Further reading has revealed that these cheeses had been made for hundreds of years before 1850 as simple fourmes ... sometimes they developed blue and sometimes not.

I believe the mid 19th century was the point where they figured that the cheese needed to be of a more consistent quality. They managed this by piercing the cheese body with small holes to encourage the blue to develop and provided a more controlled temperature and moisture to assure its development

The Specifics of Style

The evolution of this cheese is quite similar to the development of Roquefort, except that the Bleu d'Auvergne begins with cows milk and not ewes milk as in Roquefort..

Bleu d'Auvergne is a cheese that tends to be milder, creamier, less salty and more approachable than many Roqueforts. .

The key difference between this and other blues is the openness of the curd, allowing for the considerable growth of blue mold internally. This leads to the softening of the curd as the proteins are broken down by the enzymes produced by the mold..

This also makes this a more challenging cheese to make, but a delight when it is done right. The result is a mild creamy blue..

Besides beginning with a high quality milk, the other two factors in being successful with this blue are:. 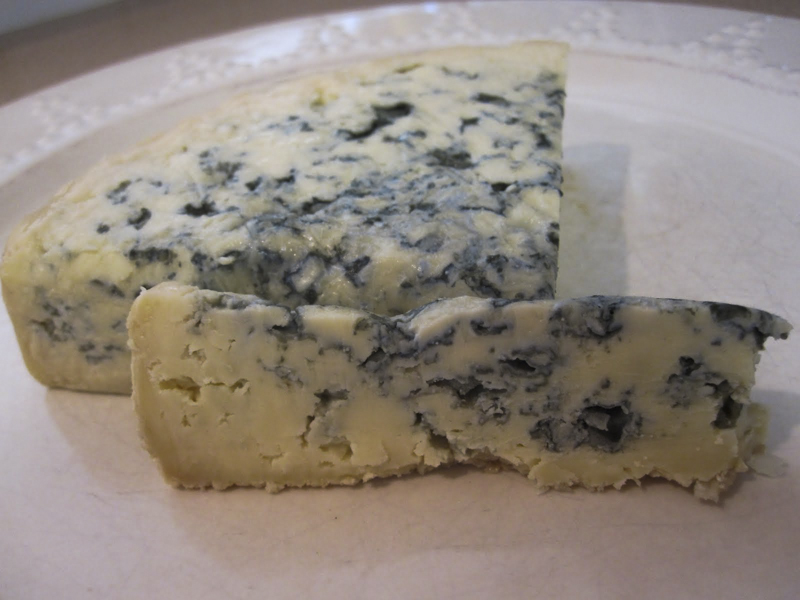 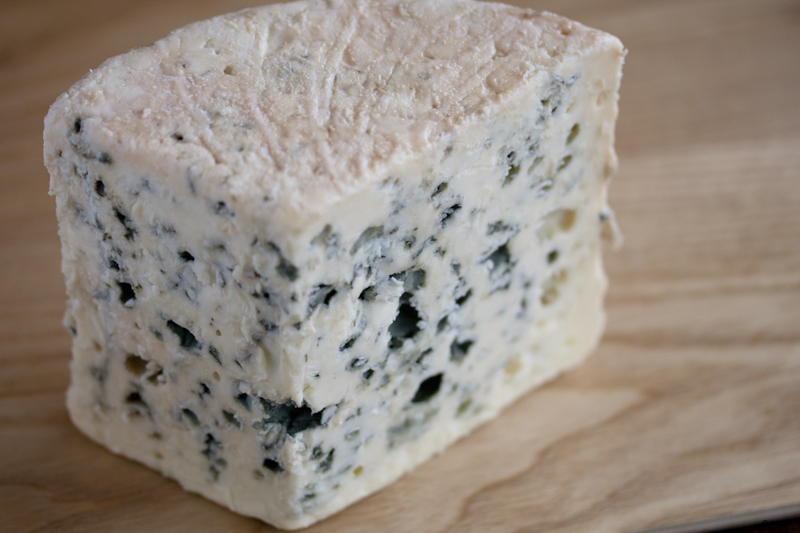 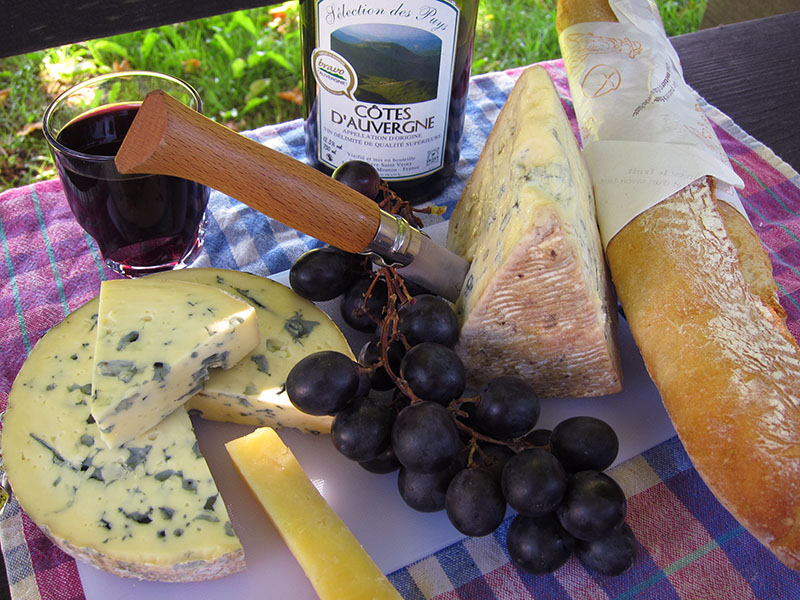 I opened this cheese today. What a terrific cheese. It has a beautiful blue taste with a nice creamy interior. I would definitely recommend this one!

This is a lovely bleu! It's made its way onto salads, pastas, and more, as well as being a jolly dessert cheese. Great addition for your cheeseboards. Not overly salty, with a nice twang from the p. Roqueforti. Will keep making this one over and over. Bonuses: 1. Excellent step-by-step pics & instructions. 2. Awesome technical explanations for things such as: culture acid development & protein changes during ripening, reasons for longer coagulation times, stir times, reasons for no add'l cook/scald times, and keeping curds separate for an open cheese body. 3. Informative & thoughtful historical content.