5 1 review
Print Recipe
Tilsit is a mild, semi-soft and buttery cheese that needs only a moderate amount of time for aging. It is perfect for the home cheese maker. Tilsit, because of it's mild flavor, is also the perfect cheese for herb and spice additions. Brevibacterium Linens (red mold) is used in making surface-ripened or interior mold-ripened cheeses such as Brick, Limburger and Muenster. It develops rapidly, ensures a good ripening, and produces flavor....

A Recipe for Making Tilsit Cheese in Your Kitchen

My guide, as written here, is for a 2 gallon batch which will yield a little more than 2 lbs of finished cheese. I normally do a double batch as I show in the photographs below for a better surface-to-mass ratio, as well as to obtain the low form profile for this cheese. You can very easily double the ingredients listed within this recipe for a 4 gallon batch.

Tilsit is a mild, semi-soft and buttery cheese that needs only a moderate amount of time for aging. It is perfect for the home cheese maker. Tilsit, because of it's mild flavor, is also the perfect cheese for herb and spice additions.

For many years it has been an extremely popular cheese throughout Europe but when you request a Tilsit, what you get will depend on where you are. It is a traditionally produced, semi-hard cheese made from cows milk that develops a rind with the aid of Brevibacterium linens (the aroma producing bacteria) during the ripening phase and starts out with between 30 % and 60 % fat in the dry matter. It can be made from either raw milk or pasteurized milk.

The variations can be numerous, but the common traits will be: 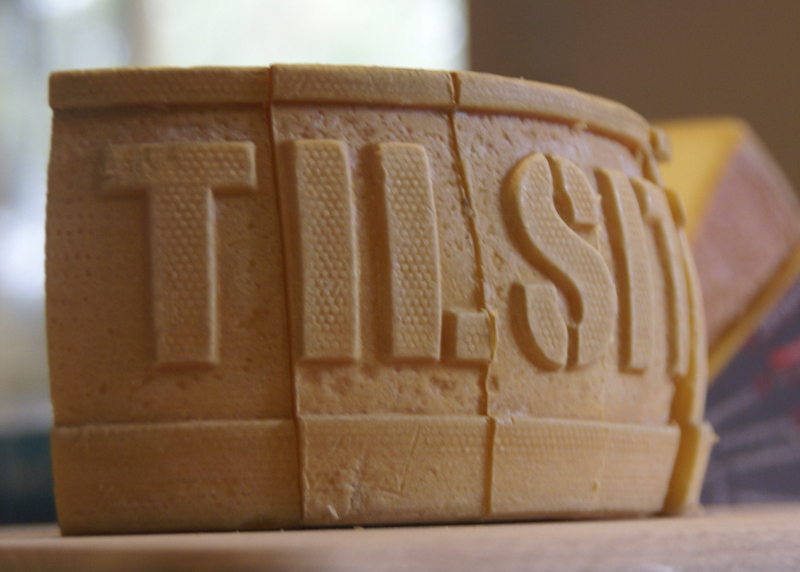 I can think of no other cheese that has developed with such a transient history.

It begins with the fertile pastures of a former east Prussian town as its namesake. The town of Tilsit, located in the Baltic lowlands, was surrounded by perfect pasture for the breed of cow named for the region of Schleswig-Holstein - the black and white Holstein cows. The neighboring Baltic Sea provided the cool damp conditions for rich pastures.

During the mid 1800's, migrants from the Emmental valley in Switzerland focused on this region for their new home and production. The Tilsit or Tilsiter (from Tilsit) recipe was first described in 1840, by a Mrs. Westpfahl who lived on a farm in the town of Tilsit. A smaller version of Emmental was the goal, but different equipment, ingredients, and ambient cultures resulted in a more pungent invention with smaller holes.

Although these Swiss brought their Alpine skills and make-procedures with them, the cheese gods had other plans for this cheese.

So, it should be no surprise that the changes they encountered in their new home made a cheese that evolved quite different. The original recipe was for a young cheese similar to what they made in Switzerland, but due to a very different environment, the bacteria, molds and yeasts of home were quite different due to a much more humid place.

The Tilsit cheese that evolved in this Baltic region became an extremely popular table and cooking cheese of the surrounding region of north eastern Europe. It was well received throughout Germany and Poland.

Continuing into the 20th century, the cheese prospered in it's new home until the wars and resulting geographic re-alignment. In 1945, as Russia absorbed the former German region, the remaining German-speaking cheese makers were expelled, taking their cheese back to their homelands. The town was then re-named 'Sovetsk' and the name Tilsit then existed only in the cheese. The Swiss took their cheese back to Switzerland, the Dutch back to Holland and most notably Denmark, and the Polish and Germans began to make their own variations.

Now, on a more recent note, the family that originally brought Tilsit back to Switzerland (Otto Wartmann ) became concerned with it's international production and right to use the name Tilsit. In 2007, they facilitated the renaming their farm community in Switzerland as the town of Tilsit.

A familiar pattern of migration to a rich dairyland, followed by an emigration for various reasons, all resulted in new variations of the cheese and it's history. (If you have not read Paul Kindstedt's book 'Cheese and Culture', I do recommend putting it on your 'must read' list for a great insight into how cheese has evolved over history.) 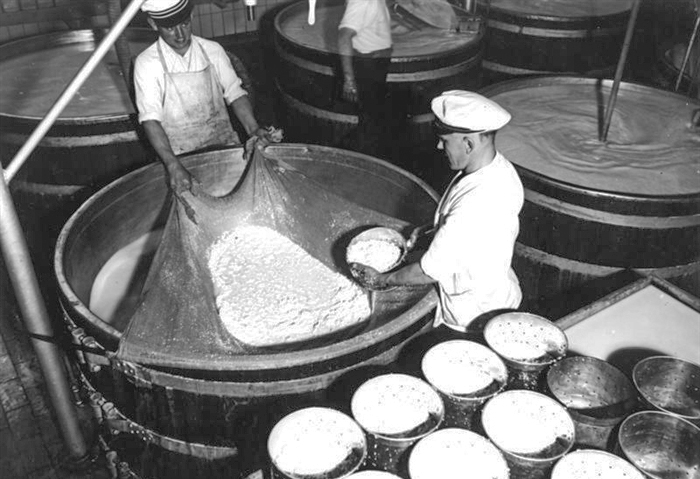 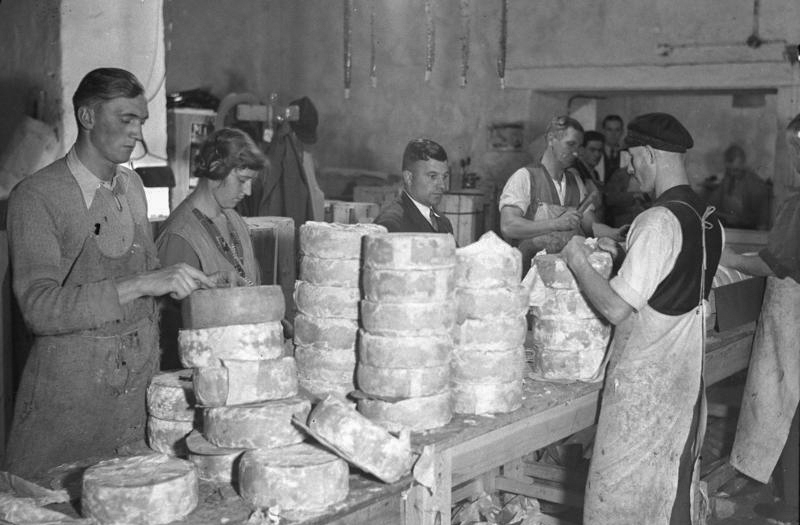 The Fog of History now leaves us with the Swiss, Polish, German, Dutch, and Danish all getting involved with it through the paths of time. 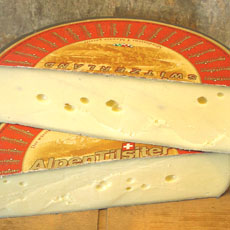 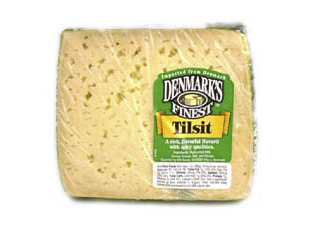 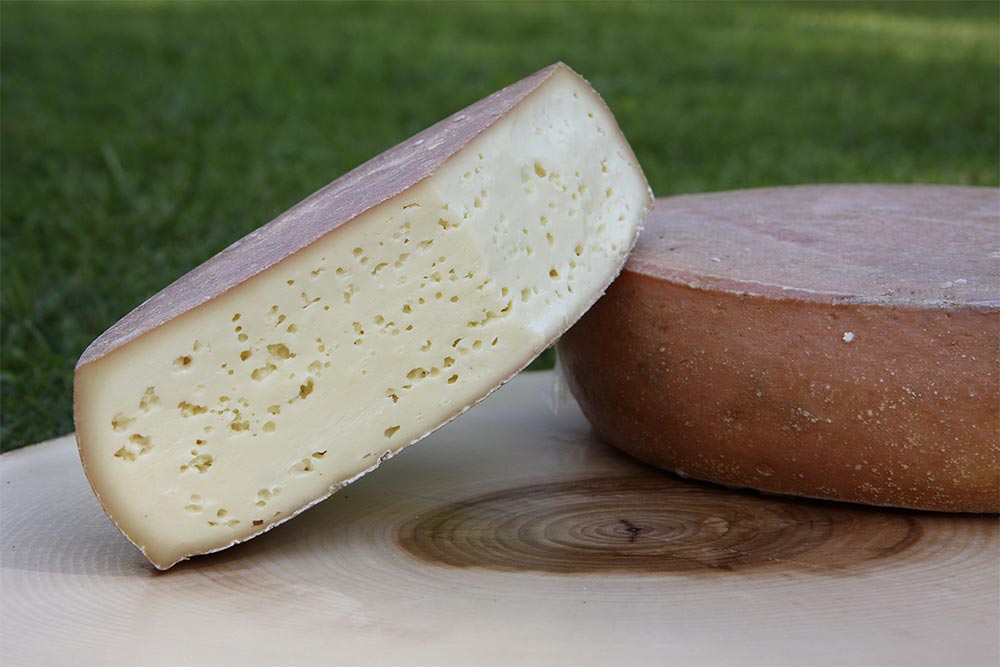 All in all, this has been a very interesting evolution for a cheese. I think that the take-away message here is that any cheese should be what we want it to be.

It is really a matter of working with what the land and it's environs provides for us and working with that to make what we like.

This is true 'Terroir' (sense of place) and every place on earth has something good to offer. 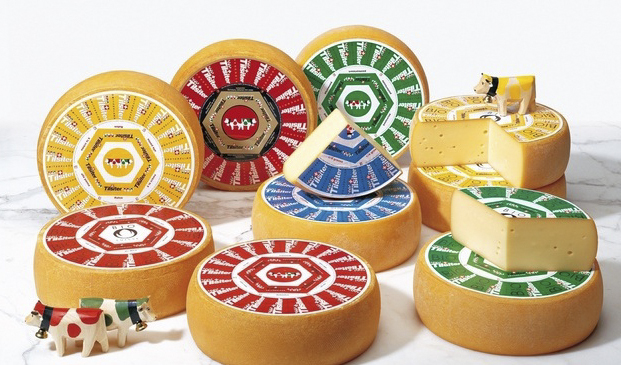 Thank you! I made a cheese I miss!

Tilsiter is a cheese I've never found in countries I've lived outside of Germany, so when we moved to Canada it was something I yearned for. I had so far only made one successful hard cheese, but I had to throw it away after discovering a mouse-tunnel in my clearly badly-protected cheese (lesson learned!). But, when I saw a recipe for Tilsiter I was determined and just HAD to try it. I didn't have much luck with the rind, but the flavour was spot on! Buttery, with a hint of "Swiss''. Needless to say, it didn't last long, was enjoyed by all and will be made again... and again... and again. The recipe is easy to follow and the result is delicious. The image is of my Tilsiter on the left, and a Colby (also good!) on the right. Thank you!