Learn how to properly store and age Feta, Mozzarella, and other Mediterranean style cheese in a light brine solution.

Do you need help with aging cheese in brine?

Recently we have been receiving some questions from home cheese makers about how to properly store and age cheese in a light brine. More specifically, cheese makers want details on aging their cheese in brine because when they used a basic salt water brine their trials resulted in less than desirable soft and slimy cheese.

There are few things more frustrating for cheese makers than having a cheese appear great one day and due to unfortunate aging, change course to become a gooey mess or become overgrown with the wrong molds.

Proper aging is just as important for the finished cheese as the initial cheese making process and selecting good milk.

We hope this information will help you on your cheese making journey. 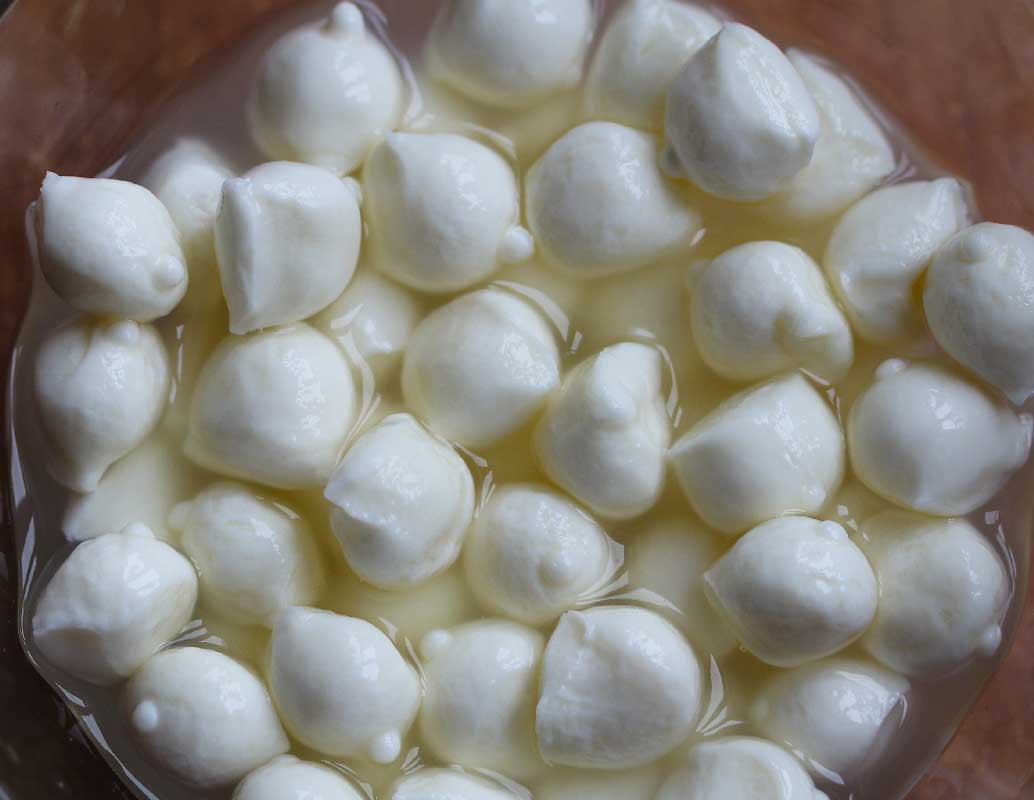 Why is cheese aged in brine?

Starting with the obvious, any cheese that is expected to last for more than a few days needs to have some way to protect itself from yeast, bacteria and molds floating around in the air. Although the nature of milk is to be a great source of nutrition it can easily be changed by enzymes and microbes from day one. The challenge is to figure out how to protect the cheese and extend its lifespan.

In temperate climates and in cooler mountain areas, deep cellars or caves in the mountains have sufficed to control what grows on the surface of the cheese and with the right conditions a washed or bloomy rind can be developed for medium firm to hard cheeses.

However, many of the soft cheeses produced along the Mediterranean Sea, Eastern Europe and Eastward are too moist to survive the same aging methods. A better choice in these locations is to use a heavy salting for short aged cheese or to store cheese in a salt brine for months. This has been a centuries old method used for storing cheese like Feta and other brine aged cheeses.

The hot, humid environment of the Mediterranean causes cheese to mold heavily and decompose while the hot, dry regions of the Mideast and Egypt become too dry for aging soft cheese. Here cheese makers needed another way to preserve these cheese. The solution again was storing in water to retain moisture and adding salt to the water to discourage surface mold growth. Here is where white brine aged cheeses became very popular.

History: Today a light aging brine is normally between 6-8% salt in water. Although traditionally this was much higher, 12% and beyond and tend to be too salty for our modern pallet. After aging the salty cheese was often soaked in milk to reduce the salt before using as a table cheese or added to cooking as the salt source itself. 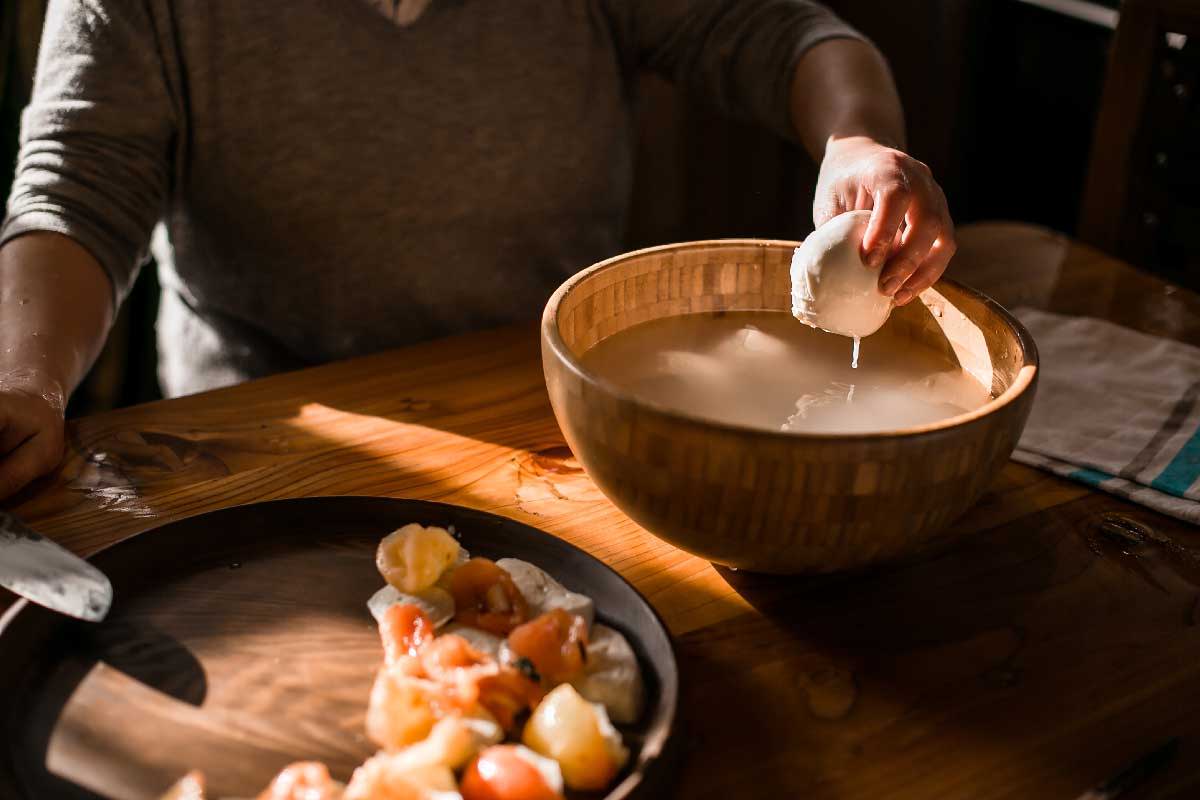 How do I make a light brine for storing and aging cheese?

A light aging brine for storing and aging soft cheese is quite different than a higher saturated salt brine used for aging hard cheese.

A light aging brine needs to have enough salt to inhibit bacteria in the water. 6-8% is a nice range, we have settled on 7% as our brine for aging soft white cheese.

The below ingredients are used to make one liter of light brine, you can easily factor up for larger volumes.

Note: It is always best to measure salt by weight and not by volume because different salts can vary in density. 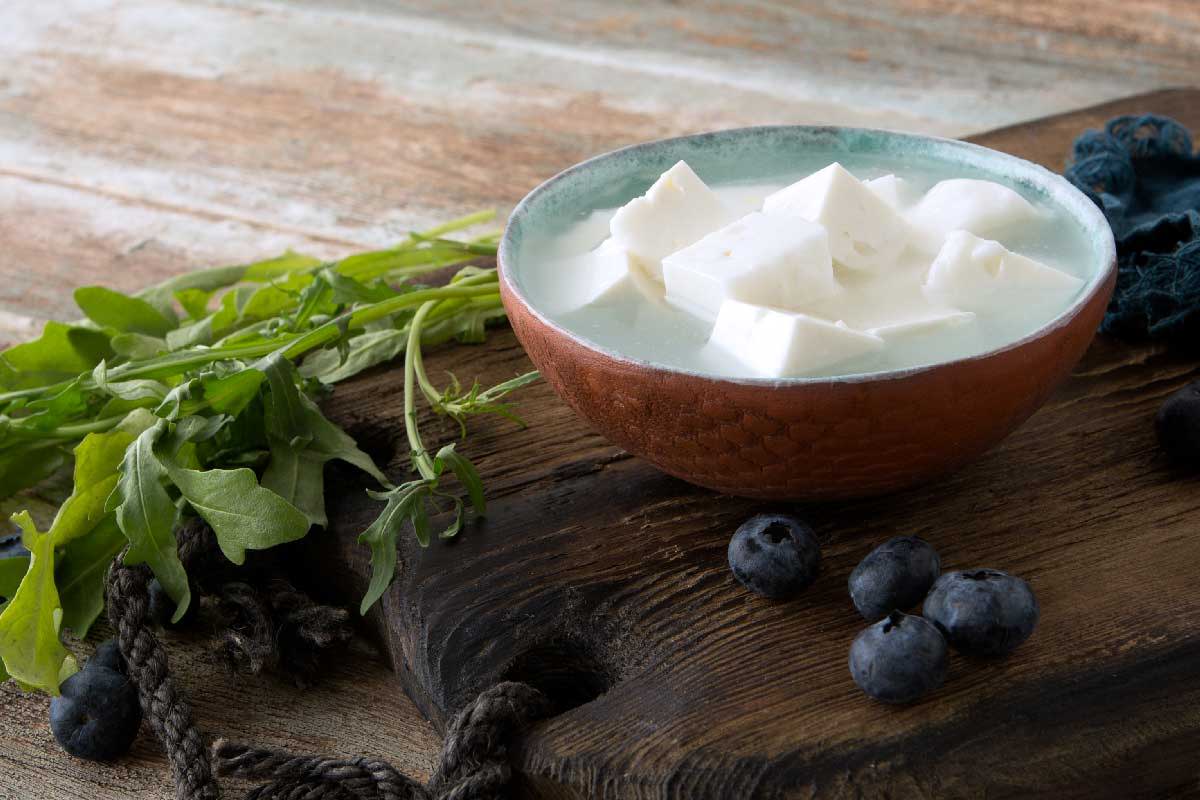 Why is calcium chloride added to a brine for aging cheese?

When stored in a brine without calcium chloride, cheese will most likely develop a very soft and slimy structure on the edges and begin to deteriorate. This is because the structure of the cheese is made up of proteins bonded together by calcium for a firm body.

The cheese structure has enough calcium to hold it together, however, if the light aging brine has no calcium it creates an imbalance. The brine will then pull calcium from the protein complex in the cheese which would have a similar result as pulling mortar from a brick wall, causing the wall to fall down.

Overall the cheese surface will become very soft and fall away if there is no calcium chloride in the light brine. 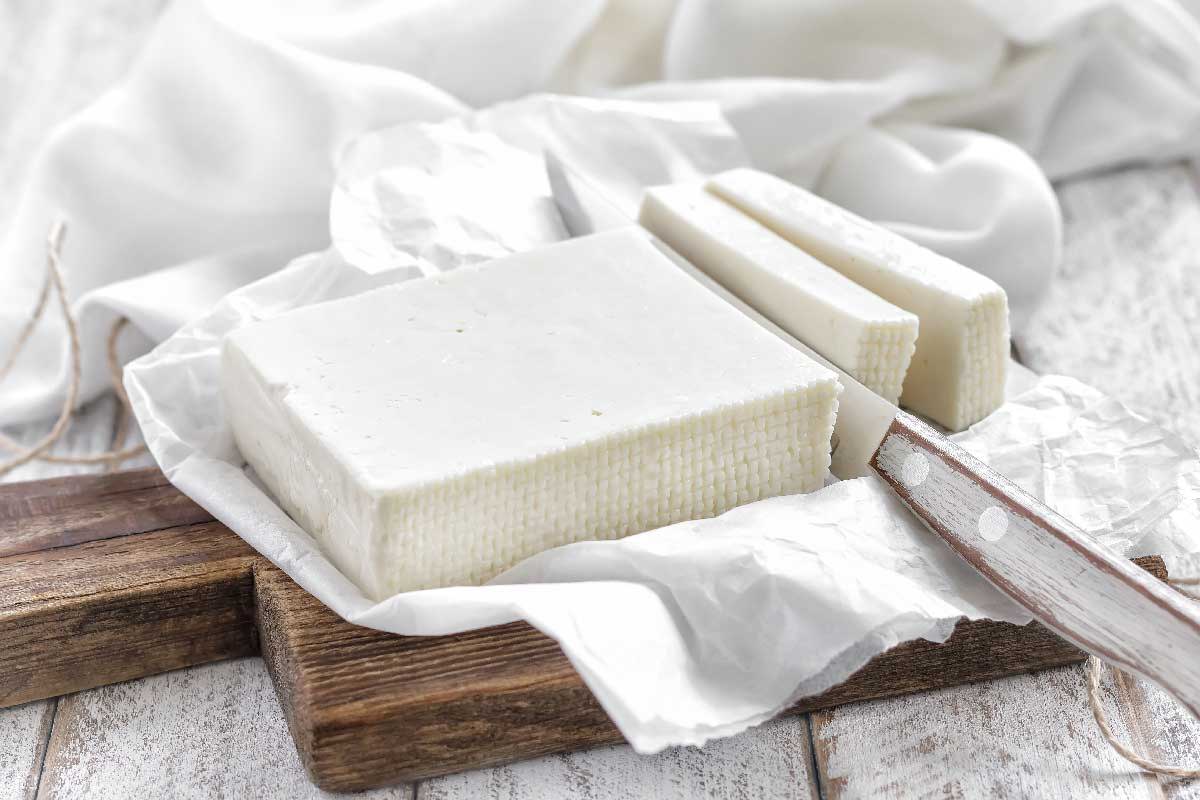 How do I adjust the pH in a brine solution with vinegar?

We also want to have the brine pH close to the pH of the cheese we are aging. For most of the cheeses aged in light brine the final pH is about 4.6-4.8.

The exception is Mozzarella or any other Pasta Filata (stretched curd cheese). They tend to have a pH of 5.2-5.3. One example would be the small balls of Mozzarella found in the deli floating in what looks like water but is actually this magical brine.

The pH can be easily adjusted by adding vinegar to the aging brine. Use pH testing strips to check the final brine. When it comes to vinegar a little goes a long way.

Our pH testing strips are quite accurate in the range needed for this brine as you can see by comparing my pH reading with the strip test here. 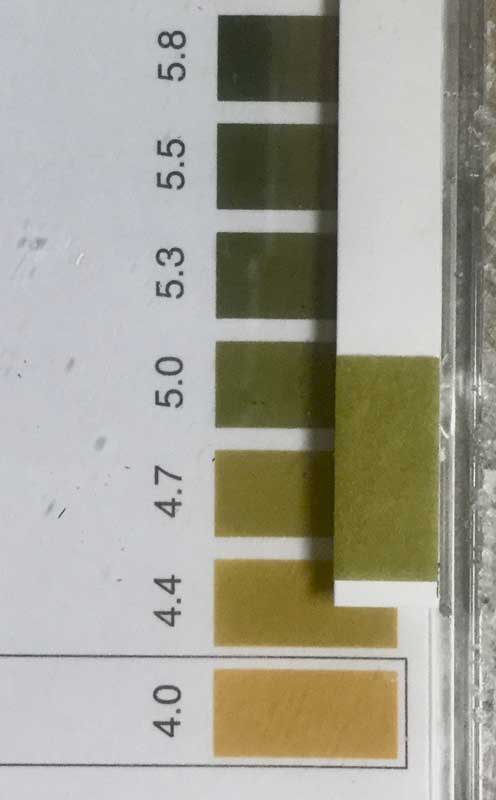 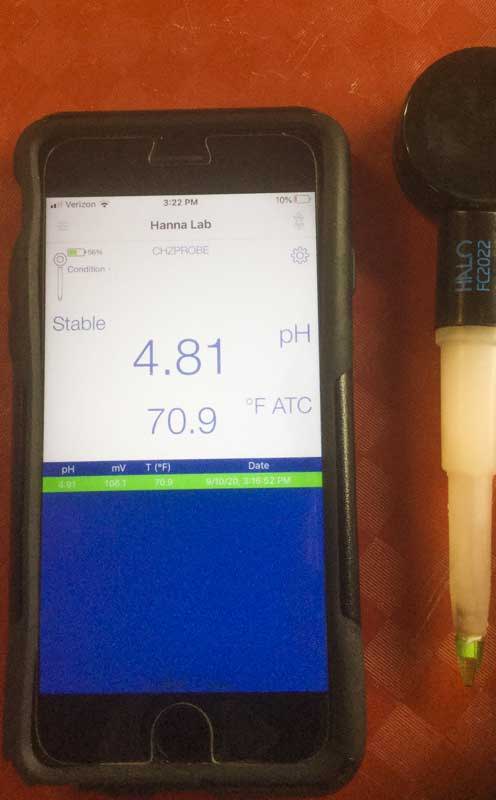 How to prepare, store and age cheese in a brine solution

Step 1. Once out of the cheese mold we like to do an initial dry salting, rather than a saturated brine soak which can create an excessively firm surface.

About 5% of cheese weight in salt can be used for dry salting. When ready this salt can be sprinkled evenly over the cut cheese. Allow the salt to dissolve completely either on an open tray and covered or in a shallow container. Once the salt is mostly absorbed into the cheese it can be transferred into the light brine storage solution. 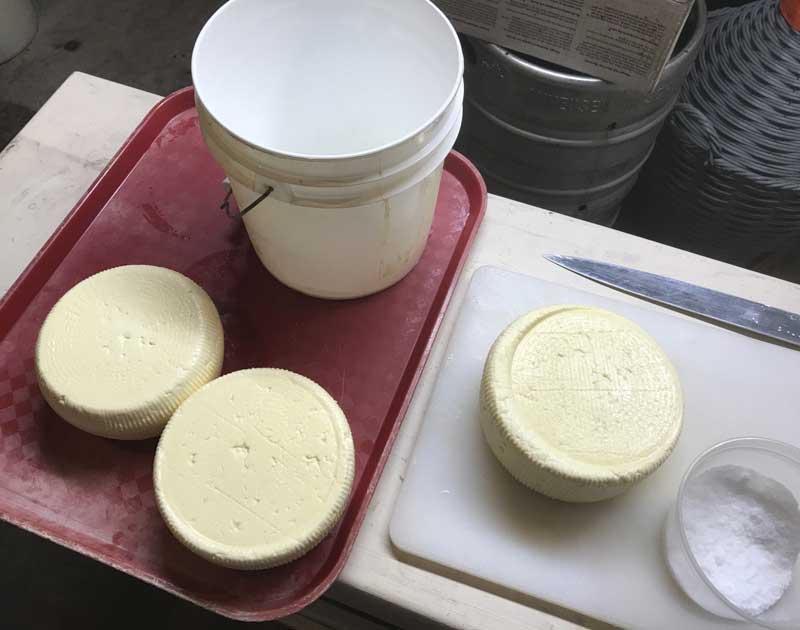 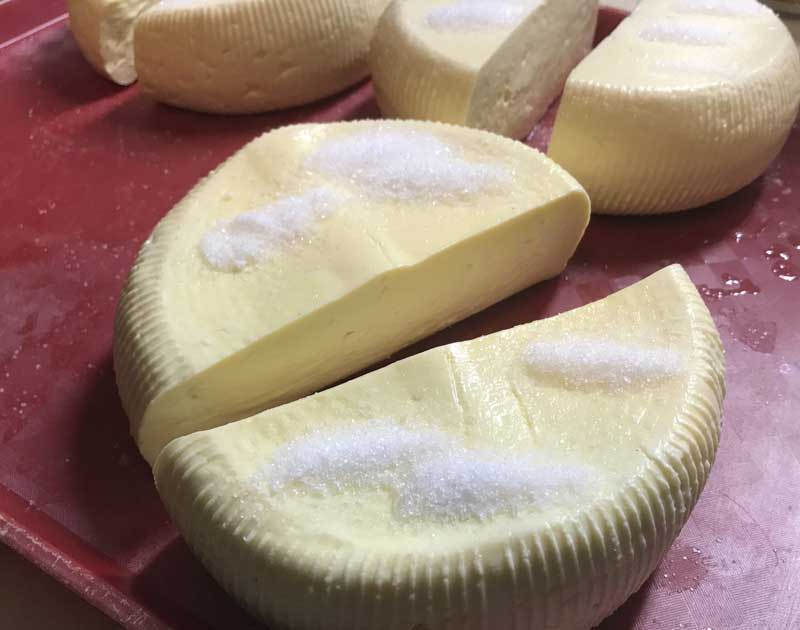 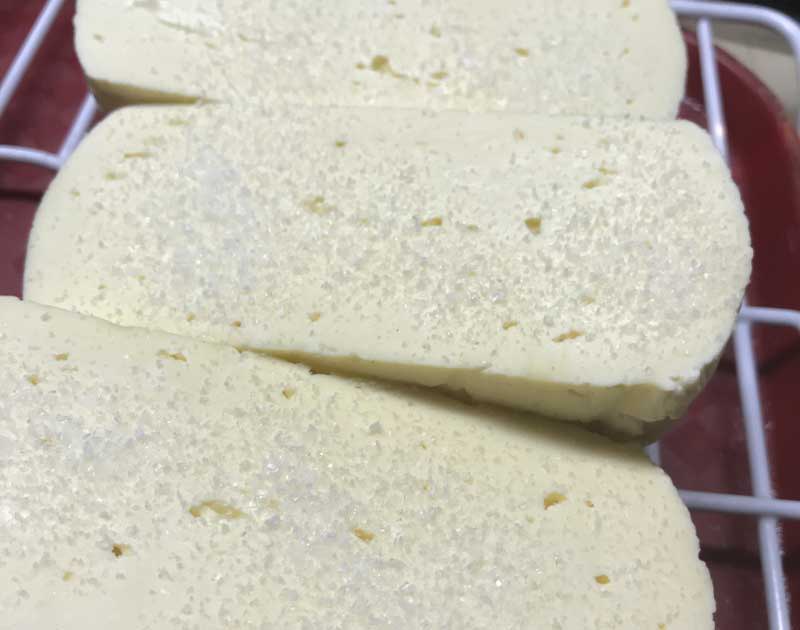 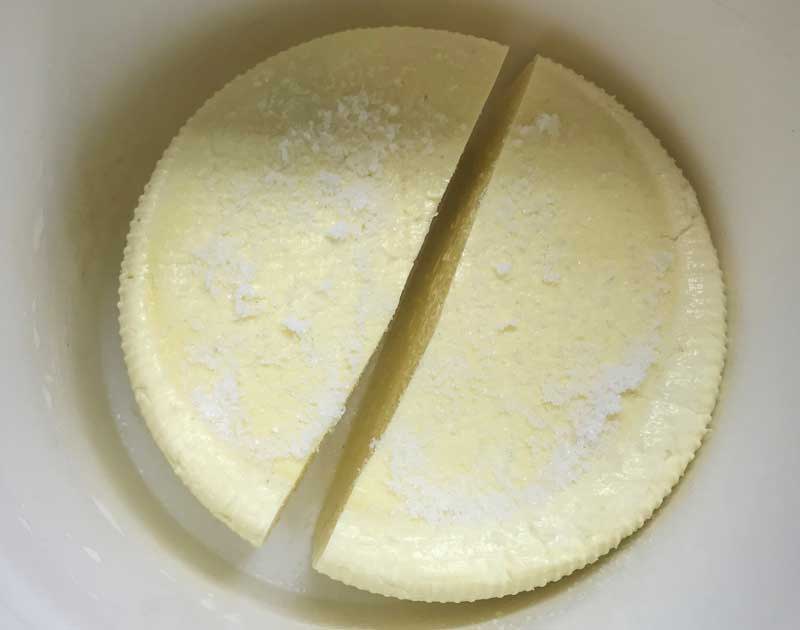 Step 2. Select a brining container. It can be a large glass jar or a food grade plastic pail, polycarbonate pails work well. 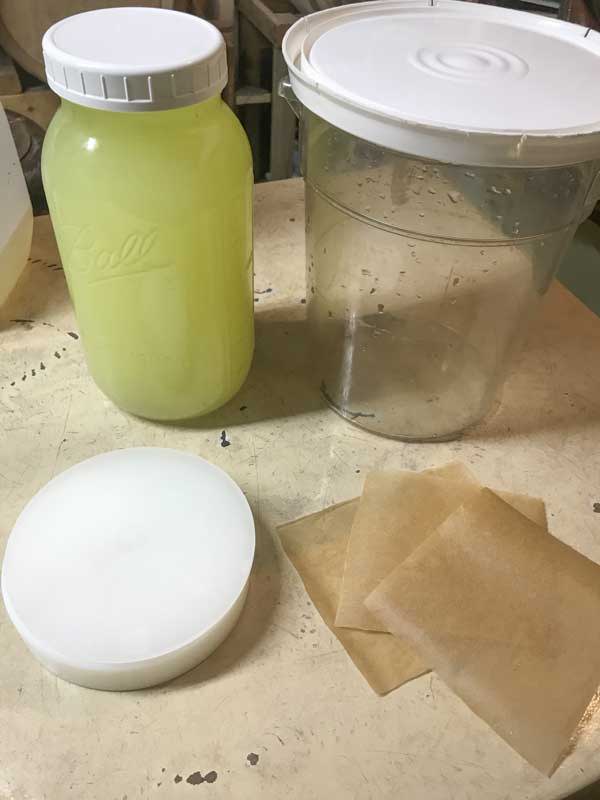 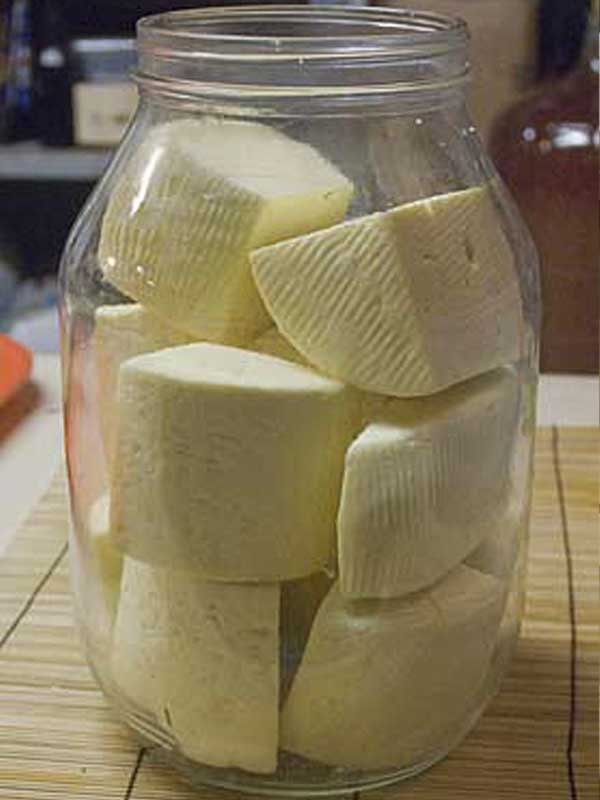 Step 3. If desired, pieces of parchment paper can be placed between the layers of cheese to keep them from sticking. 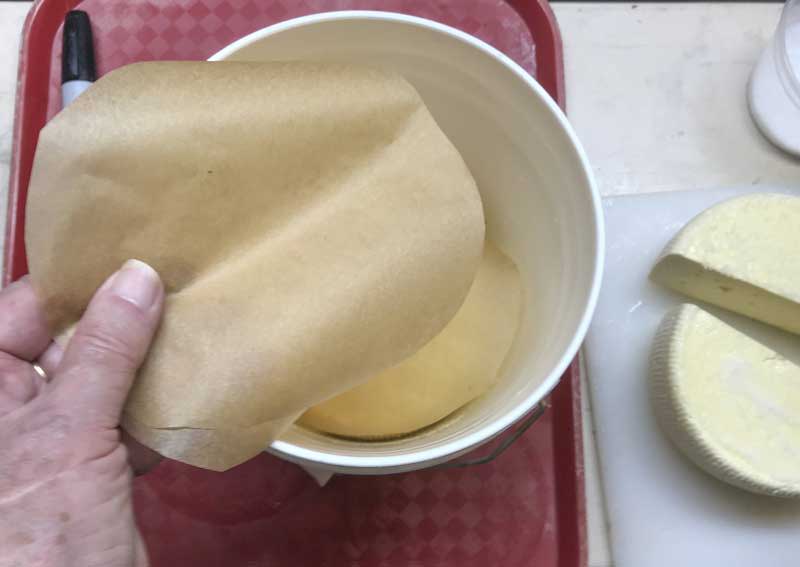 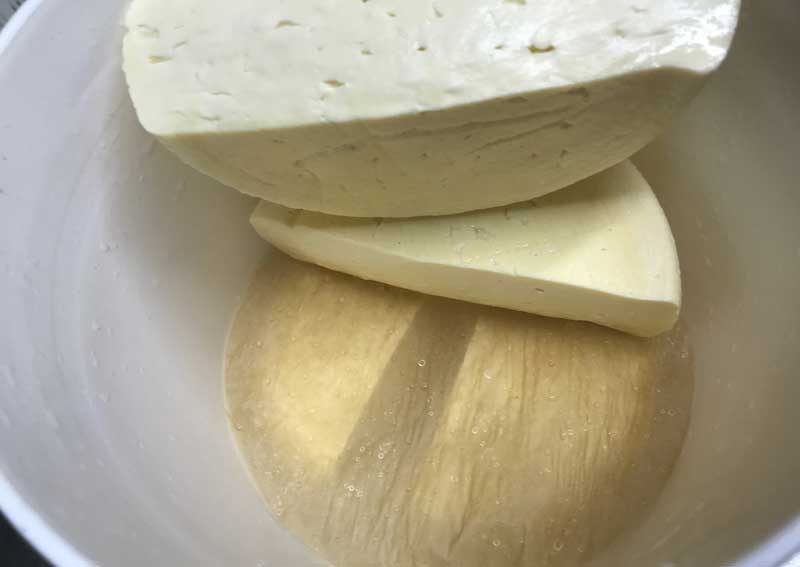 Step 4. There should be little air space when the lid is sealed. If the cheese is floating you can use a weight to keep it below the surface. Two options for simple weights are a thick plastic disc or small zip lock bag filled with brine to weight the cheese. 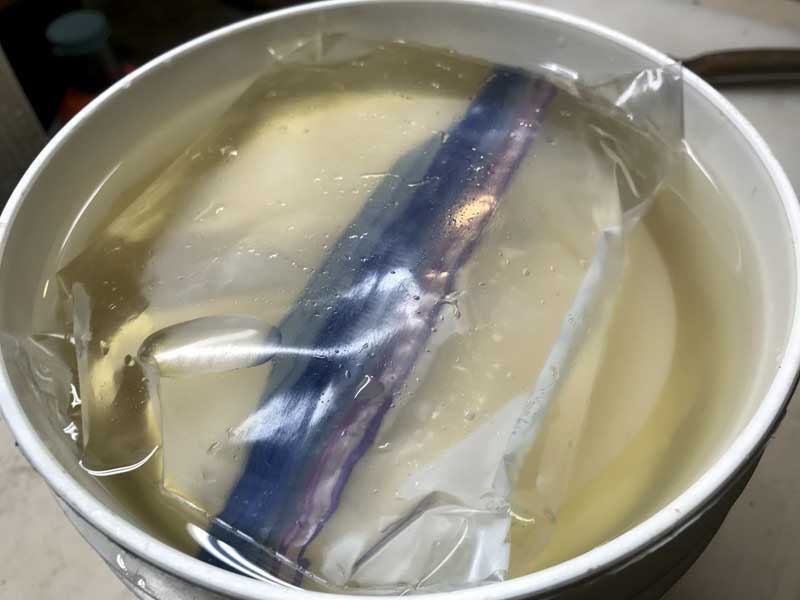 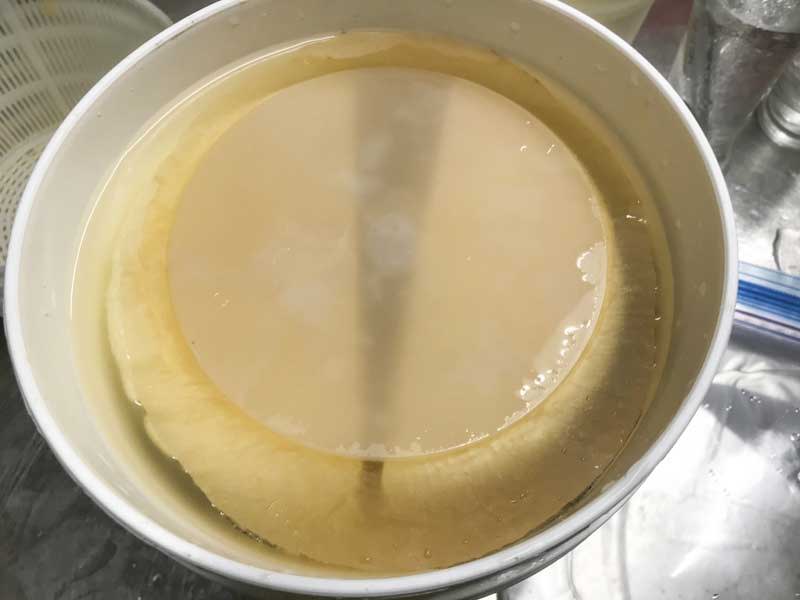 Step 5. Finally close the lid and move the container to a 52F aging space or a fridge (the fridge will age slower). You may age in a slightly warmer space a but more issues can surface is mold begins to grow on top of the brine.

Check on the aging cheese periodically to make sure everything looks good. We usually take a small sample piece of cheese to see how it is progressing. We are big fans of tasting through the aging process. 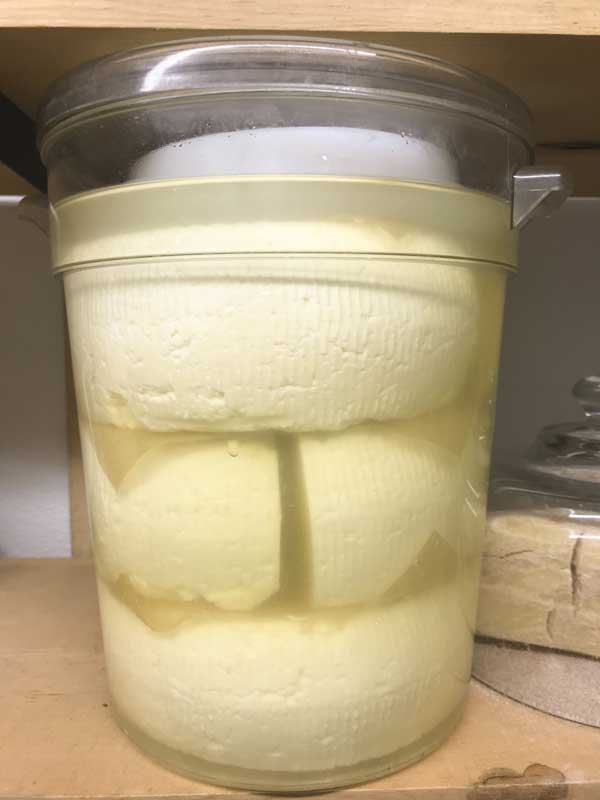 Why is cheese stored in brine for aging?

One reason to age cheese in a light brine solution is if you make so much cheese that it becomes sour or moldy in the fridge before you can eat it all. A high moisture cheese can accommodate all kinds of bacteria and molds as well as a late souring from residual bacteria inside the cheese. The amount of salt in the light brine solution and making sure all the cheese is submerged will avoid this problem.

Another reason you may want to age cheese in a light brine is because the flavor and character can improve when aged this way. Many enzymes inside the cheese are still at work and the result of further aging is a more complex flavor. Through aging the proteins and fats can break down and reconfigure which brings about wonderful surprises over time.

We have kept cheese in our cave for 3, 6, and 9 months and enjoy wonderfully different results as the cheese ages. 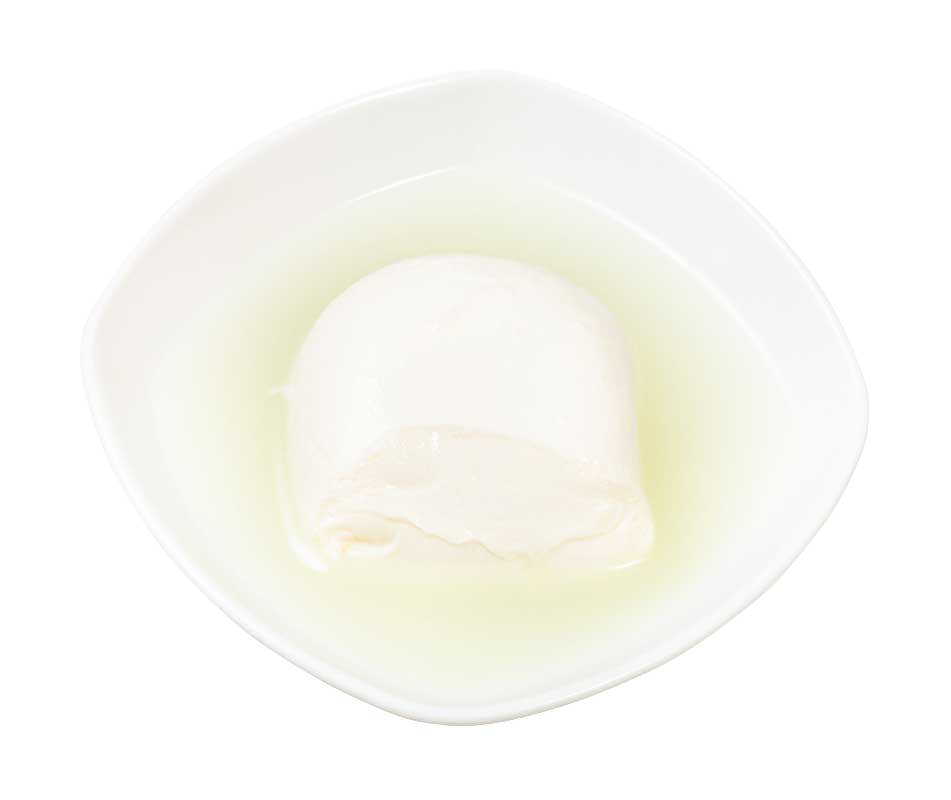 How to Store and Age Cheese in Brine

Get the best results when storing and aging Feta, Mozzarella, or other Mediterranean style cheese...

Learn About Cultures for Cheese Making

Some of the top questions we receive about cheese making have to do with cheese...

When trying to find good milk for cheese making there are a few things to...

The Evolution of Milk For Cheese Making

Most milk comes from cows and we’d like to think they are all out on...