Greetings from New Zealand. I was born in Cape Town, South Africa in July 1951, so that makes me an 'old bugger.’ I am trained as a toolmaker and worked for many years in the Aerospace, Research & Development and Fine Mechanics arena while still in SA. We emigrated as a family to Christchurch New Zealand in January 1996. I have worked most of my time in NZ as a Toolmaker and tool designer/maker etc. So as you can see from my background there is no chance that I would have anything made 'outside' when I could do most of it myself.

My wife has always said that I am a 'Latent Hippy', suppose she has had enough reason to say so doing the beekeeping, pottery, vegetable growing/preserving, beer making, clock making, furniture making etc. Not surprisingly cheese making was not too 'out there', having always said that I wanted to try to make cheese. Having the desire is one thing, finding books was not that difficult, but finding anyone to ask questions of was just another story altogether.

I have been making cheese for about 3 years now, last nights cheese was number 90, and make mostly the 'Continental' styles, Gouda, Swiss, etc. It is quite a lot of cheese when one considers that it is ninety cheeses @ +- 6.5 Kg, close to 1/2 a ton of cheese. My 'make' is only 55 to 60 liter, +- 13 gallons, doing the Gouda' styles and only one cheese at a time, I have managed to devise a method of 'direct salting', but still pressing under whey. This method works quite well and I have not had a single 'flop' as yet, just good luck and hygiene.

Unfortunately I am not registered to sell my cheese in NZ, so it is mostly for my own consumption. I am not supposed to give any away, let alone sell any. The compliance cost to get registered is totally extreme and would kill the whole idea. I am not even going to get into the debate about pasteurized milk cheese etc.

I just had to compliment New England Cheesemaking Supply on some very professional looking cheeses, especially the one with the 'ripened rinds'. All other attempts that I have seen look like 'home jobs'. I am just a little afraid of doing the ripened varieties seeing that I only have one 'communal' storage area. I get away with the 'blues' by putting it into a large airtight bag within the same area. I used the book Home Cheese Making (a rather old copy from 1996) as the basis for all my cheeses.

My favorite, is one that I call "Blue Decadence" well that is what it is, a 'homemade' recipe that is based loosely on a 'Double Gloucester, but with the extra cream that I take off from the previous days 'Swiss Style'. Adding Annatto adds to the impact of the colors. To help with the 'breakdown of some of the cream, I also add some ‘Lipase'. After at least 6 months the cheese is 'needled' and left to blue for 2 to 3 months. The taste is spectacular, but not as great for the waist-line. 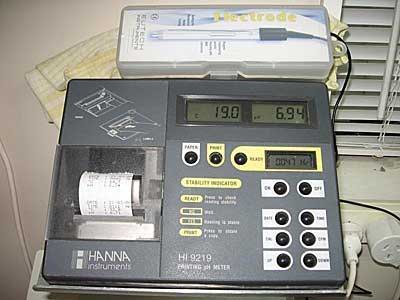 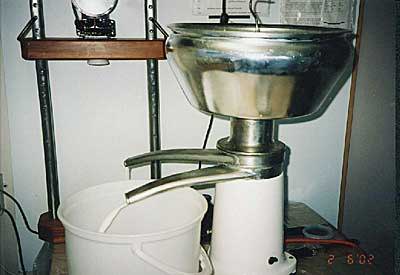 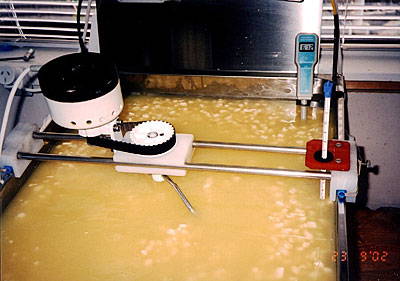 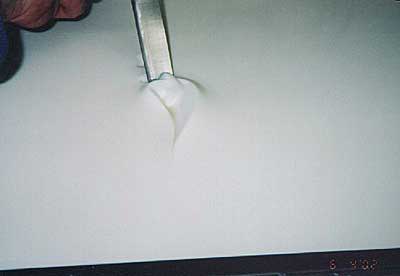 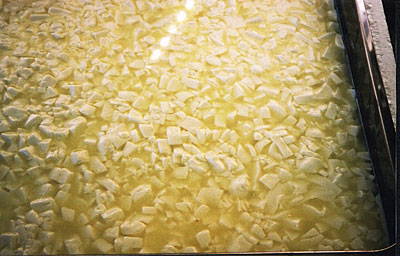 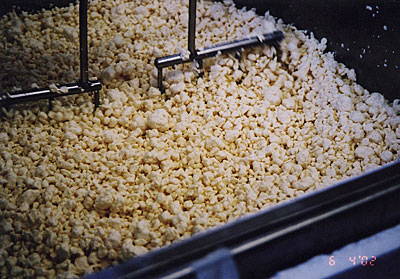 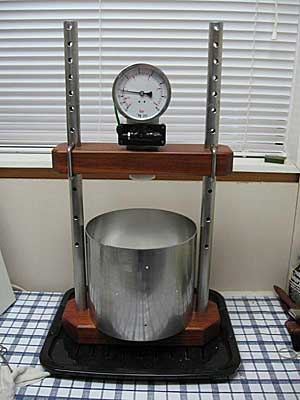 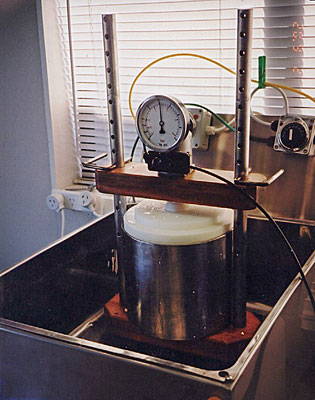 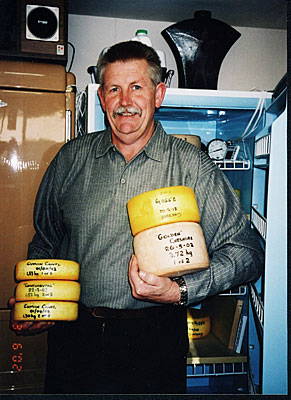 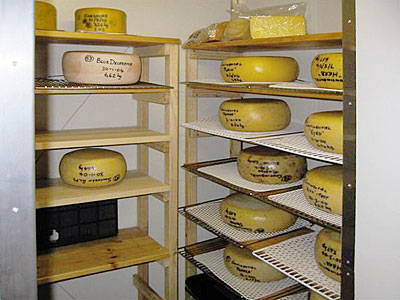 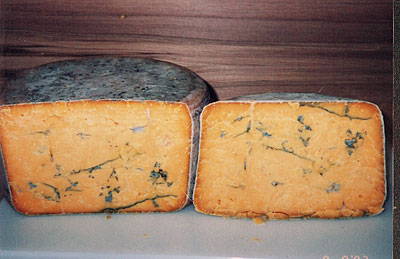 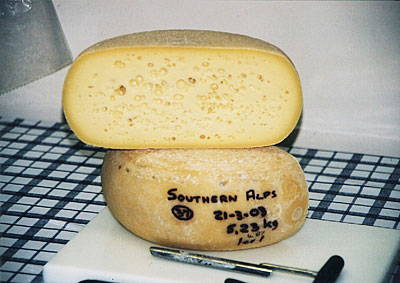 Now down to some details. My 'cheesevat' holds 55 liters of milk. Heating is done by direct heat, not recommended at all, so I modified the system. I have two standard 'oven grill elements' in series, then these pairs in parallel. The net result is that the 'Watt Density' is reduced by 50% while still having a good energy input and with good stirring the milk is not 'scalded'. Cooling is done by the submerged stainless steel coil that I connect to the cold water supply. Our ground water is around 10'C (50F) all year round.

The vat is made form a large commercial stainless steel wash basin, the outer jacket I made my self, so too the stirrer, cheese-press etc. The vat is also 'jacketed and has an element and submerged pump in the water jacket too.

I control the pressure during pressing by the use of air pressure, controlled by a pressure regulator. I know that this all sounds very complicated but this is just how I have managed to cut the 'make time' down to 4 to 5 hrs, depending on the type being mad.

If you are not lost during my explanation, you will see that I have managed to 'trim' off as much time as I dare in the early stages. So as you can see, I have actually managed to build a small-scale factory process at home, just making one cheese of around 6+ kg. every Friday night. 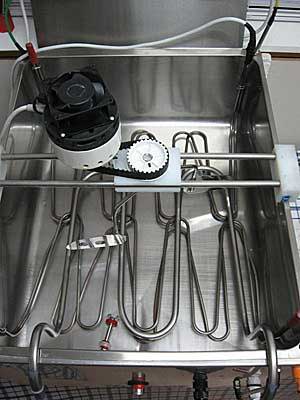