In 1885, Joseph Steinwand developed a new recipe for a mild, sweet cheese and named it after the village in Wisconsin where his father had built a cheese factory. Needless to say, it was very popular!

It is called a "washed curd" cheese because the curds are washed before they knit together as they are allowed to do in a Cheddar.

Colby was the cheese used in the original "nachos" and it is frequently mixed with Monterey Jack to make "Co-Jack."

This is a very easy cheese to make and it's ready to eat in 4-6 weeks. With Jim's detailed directions, you can be eating it and sending us pictures of it before the next issue of this Moosletter comes out! We'll be looking forward to hearing from you. 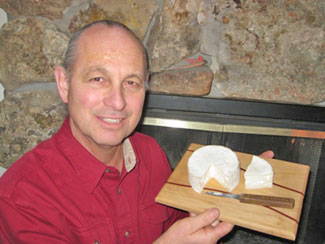 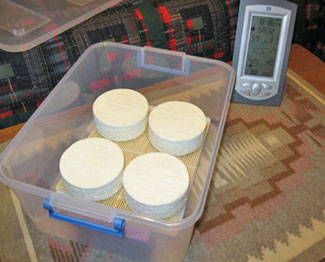 Joe Heyen from Colorado just made his first Camembert

It came out great!

He broke it open in mid-December and now he can add it to the growing list of cheeses he has conquered. That list includes gouda, gorgonzola dolce, quark, coulommier, chevre and cheddar.

In 2005, Joe retired and he and his wife, Mary Jo, moved from Chicago to Estes Park, Colorado so they could hike and snowshoe. Shortly after the move, Joe read Barbara Kingsolver's book, "Animal, Vegetable, Miracle" (which has an entire chapter devoted to our business).

He got inspired and ordered some supplies. With the easy recipes in our book, he began to join the ranks of extraordinary home cheesemakers who make their own fabulous cheese. 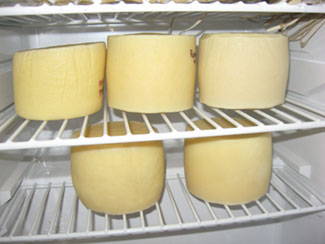 She's really cranking them out!

I am back in action with my "consuming" new habit of cheese-making! I bought the basic kit in July, and have been making cheese many weekends since then. I started with the farmhouse cheddar and have made a variety of pressed cheese and feta since then; about 15 cheeses in all.

I would also like to thank Jim (Wallace) for the responses to my questions on feta and gouda. There is so much to learn. Today I am working on a stirred curd cheddar. I am attaching a picture of my "cheese cave" which is my son's dorm frig, turned as high as I can get it (50 degrees). These are jack, two romanos, caerphilly, and gouda.

Susan Casner-Kay, Sunnyvale, California
Susan would love to hear from other cheese makers in her area -  scasnerkay@gmail.com 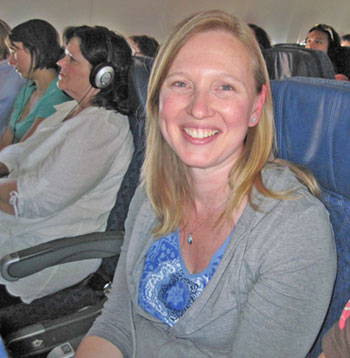 Are You Going to the Cheese Festival and Competition in Quebec This Summer?

We first met Joan Kimball (at right) when we were on the same plane flying to the American Cheese Society Annual Conference in Seattle (summer, 2010). At the time, she was preparing to co-chair the ACS conference in Montreal (the next summer). So, we were delighted to hear from her about this upcoming festival and we're hoping to attend it.

I am contacting you because I noticed that information for Québec's Séléction Caseus Cheese Competition was missing in the calendar. Therefore, I just wanted to share that information with you - with the hope that you might include it.

I would really love for people to go to the Cheese Festival in Québec. I'm not certain if you've ever visited it before but it's a real grass roots, folk type festival that has great music, crafts and cheese! All the cheesemakers come out for it. Let me know if you have any questions.

The 2012 dates for the Victoriaville Fine Cheese Festival are June 14th-17th, 2012, and usually awards ceremony for the Séléction Caseus is held just prior.   At the Festival itself, there is a consumer award aspect to it, where visitors can choose their favorite cheese.

Joan Kimball
Agri-Food Attachee, Quebec Government Office Chicago
There is a great YouTube video about the competition. It's in French, but it's very interesting to see "behind the scenes" while the judges taste the cheeses and choose the finalists. 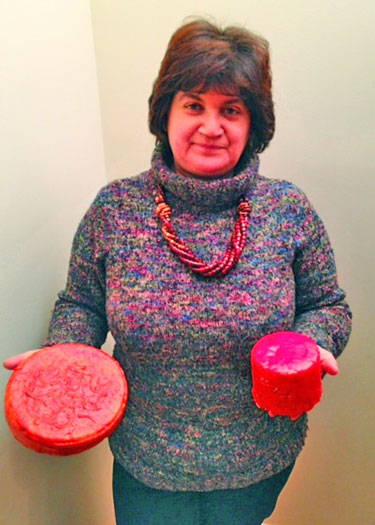 I wanted to introduce myself. My name is Anna Ganelina. I live in Rockville, Maryland.

I have a scientific background and work as a patent agent, but I got very involved with making cheese and have recently started my new cheese business: KoRoVa Cheese.

We specialize in making fresh artisan cheeses for order and in teaching the cheese making art. Last week we had a very successful mozzarella making class at a local Whole Foods store.

I enjoyed reading your articles about kefir. I grew up in Russia, and kefir is a staple food there, so I've made quite a few different cheeses from or with kefir.

Now, however, I got interested in making cheese with kombucha. Have you ever had any experience with that? It would be great to learn something new.

In the picture above, Anna is holding her Korova Cheshire and her Korova Buttermilk cheeses. If you have a recipe for kombucha cheese, please send it to us at Moosletter@cheesemaking.comso we can share it with everyone.