In today's world, finding a great quality milk is not always easy ... (more about milk quality). We offer this wonderful option if you find your milk sources to be a problem. Just use a good quality brand of non fat dry milk Powder (NFDMP) such as 'Carnation' to make up a gallon of milk and include 1 pint of cream with it.

With this guide we will take you through this process step by step with as much detail as we could possibly put together. You won't believe how good this cheese can be.

This method of making mozzarella involves adding cream to a nonfat dry milk powder mix. We have had great luck using "Carnation" brand milk here so if you are having problems with your brand try this. We have tried many other brands along the way that also do work well.

NOTE: Ultra-Pasteurized will work fine for the cream since the calcium and proteins for the cheese are already in the milk.

Happy New Year to you and your team at cheesemaking.com. It was great dealing with you last year and I look forward to again ordering more supplies from you this year. Really, the cheesemaking book, rennet and some other supplies that I ordered from you last year was beneficial to us in starting our cheese making venture at Tropical Village Farms in Somalia, East Africa.

I have attached some pictures of our farm and some samples of our cheese making which I believe we can still improve and experiment in making some other types of cheese. Hopefully, dealing with you will assist us in making our farm a real cheese making farm.

We made the Farmhouse Cheddar yesterday. I was going to use bricks that are in our back yard to press the cheese but when I dug them out of the snow, they were frozen to the ground and I couldn't budge them! So, my kids (aged 2 and 4) and I searched the house for heavy things and this picture shows what we came up with to make 20 lbs. of pressure.

From bottom to top we have:

This made me laugh and wanted to share it with you. Needless to say, I ordered your press plans this morning!

Over the Rainbeau by Lisa Schwartz

Lisa Schwartz is still not sure why she became a farmer. She had a good life as a suburban mother in Bedford Hills, NY. But, she understood the importance of sustainability and one day, when she was 45, she just decided to do it.

She began shopping for goats. When she finally found a goat farmer(Carol Bunnell) willing to sell her an Alpine doe, she had to ask for a lesson in how to milk her:

After she demonstrated her technique with several goats, she sized me up and barked, "Sit down." I reached for the udder, grabbed the teats and squeezed: no milk. I adjusted my grip, took a calming breath and watched Carol again. I couldn't figure out why no milk emerged from the engorged, pink goat udder in my hands. Carol laughed and coached me briskly:still nothing. I wasn't laughing. How could I have thought I could do this on my own when I returned home? My manicured nails that I had tried to hide from Carol were digging into my palms, the sweat was dripping down my back and the goat was losing patience in the stanchion, looking for relief. Finally I found the right grip and after a first quick spurt from the udder, milk began to fill the pail.

After that, there was no turning back for Lisa. She had made the plunge and soon she was delivering her first newborn, expanding her herd and making her own prize-winning cheese. 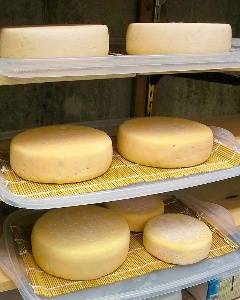 A new Workshop for 2010, "Soft and Semi-Soft Cheese"e will be held March 27-28 here in New England. Jim Wallace (our tech expert) has designed this class for those wanting to jump into cheesemaking but would like to see the results of their efforts in less than 6 months.

Jim feels this is the perfect class for the new cheese maker since it lays down a great foundation on the concepts of cheese making plus offers a very short cycle to assess the final cheese.

This class will take a look at 3 cheeses that will be ready to eat in 30-60 days. The 2 day workshop will cover the complete process for 3 very unique cheeses that span the range of cultures and process temperatures. It will begin with an analysis of milk and continue through the final aging requirements. Following lunch each day will be an opportunity to evaluate cheese and participants are encouraged to bring their cheeses for this.