This blue is made in a very traditional style using 2 curds made on separate days and molded together on the second day. It is drier and sharper than the 'Dolce' Gorgonzola and will ripen over 4 to 6 months.

Q. I made some farm house cheddar last year. After aging, my cheese was crumbly and dry. I followed the exact recipe in your hard cheese making kit, including using a mixture of milk and heavy cream. Do you have any idea what would have caused my cheese to be dry and crumbly?

A. Chris ... What has happened here is that the acidity of the cheese developed too much

.. As the acid increased it caused the calcium balance to change (less Ca in the cheese) .. This caused a weaker bond for the curd and hence a less elastic more brittle cheese... the excess acidity also caused the curds to shrink and to force out more moisture over time and hence the dry chalky curd .. This is commonly known as 'acid cut'

.. A combo of these 2 should get you back on track.

How critical are temperatures of melted wax for sealing cheeses? We have waxed several cheeses that now have some mold growing under the wax.. how can we resolve this?

Leslie ... I am aware that Ricki says in her book to melt the wax in a double boiler but in effect there is a problem with that... the wax will not be hot enough to destroy the mold on it's surface so enough air can get through for this mold to grow under the wax.. I think she was most concerned w/ the safety of her customers.

... To be successful at preventing mold the wax needs to reach a temp of 225-240F and cheese dipped for at least 6 seconds the BIG PROBLEM here is that you really need to control that temp because if the wax gets hotter it might reach it's flash point and catch on fire... what I do is use a heavy pot with a candy thermometer and control the wax temps carefully ... Others simply get an old electric fry pan .. get the wax up to this temp .. and tape the temp control dial in place.

I Have a friend with sheep. Can you use these kits to make sheep cheese? Are there recipes

Laurie.... Yes most of the recipes can be made with sheep milk but due to the high protein levels the rennet should be decreased by 25-50% ... Over time you will find that certain milks work better for some cheeses... experiment a bit and have fun .. It's part of home cheese making

Since we are always looking for new and exciting twists to cheese making, we were excited to hear from Yoginatha Swami as he explored the possibilities of making cheese from the monasteries 2 cows. 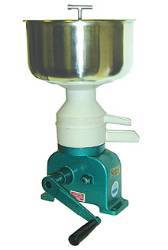 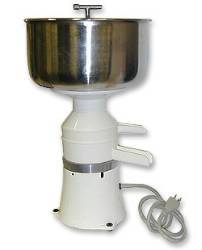 One of Ricki's great fans is Barbara Kingsolverand she has written an article for the June issue of 'Food and Wine' magazine on Ricki's cheese making workshop which she attended recently.
Oh yes ... She is one of our favorite writers too! Look for this issue coming out in mid-May.

"To convince us that an hour or two spent rendering up cheese in our own kitchens could be worth the trouble and what would that take? A motivational speaker, an artist, a devotee, a pal who builds your confidence? A Cheese Queen, maybe?

The answer is yes, all of the above, and she exists. Her name is Ricki Carroll. Since 1978, when she started New England Cheesemaking Supply Company and began holding workshopsin her western Massachusetts kitchen, she has taught some 7,500 people how to make cheese."

For a long time now, folks have been asking for a reasonably priced cream separator ... So ... Ricki has come up with not one but two options that should do the trick

These simple Cream Separators will hold 2 gallons which makes them perfect for domestic or small farm use. The milk tank, separation bowl and disks are made of stainless steel. The cream spouts are made of food grade Poly.

These Separators will process 15 gallons per hour and come in both hand cranked and electric.