A semi-hard, unripened and brined cheese, originally from Greece and the Middle East

Get out the barbeque for this one!
If you've never tried Halloumi, this is the season to make it and grill it. Yes, that's right - you can fry it or grill it and it won't melt!

There are technical reasons for this, and Jim explains them in his recipe, but the important thing is that when you grill it or fry it in a little olive oil, it softens up, and becomes creamy on the inside and crispy on the outside. (Yum!)

As if that isn't enough of a reason to love it, Halloumi is a very easy cheese to make. There is no starter culture, the aging time is only 3-5 days, there is no pressing required and, you can use cow's, goat's or sheep's milk in any combination.

To grill: Slice the Halloumi into slabs that are 1/4 - 1/2 inch thick. Brush each side of the cheese with olive oil. Turn on the grill to medium-high heat. Put the slices of cheese directly on the grill. Brown for about 3 minutes on each side.Plate the cheese and squeeze lemon lightly over the top (optional). Serve immediately.

To pay-fry: Cut it into 1/4-1/2 inch slabs. Heat a tablespoon of olive oil in a pan over medium-high heat. Add the cheese and fry for 3 minutes on each side.

Sent by Ari Weinzweig to members of the American Cheese Society:
On Tuesday July 3rd, the food community lost one of its finest, Daphne Zepos, founder of Essex Street Cheese Company and co-owner of The Cheese School of San Francisco.

For the past two decades, Daphne Zepos became known as a teacher, cheese monger, importer, writer, world traveler and extraordinary educator. She was one of the most outspoken, insightful and dynamic advocates for traditional cheese in the U.S. and around the world.

The daughter of a Greek diplomat, Daphne grew up living in Athens, London, Geneva, and Brussels. As a young adult, she studied Medieval History at the University of Kent in Canterbury, England, and Architecture at the Architectural Association in London. In 1987 she moved to New York and enrolled in Peter Kump's New York Cooking School. In 1990, while traveling in Greece, she met the American artist, Brad Brown. The two were married in 1994 at the San Francisco City Hall. For the next 18 years, they split their time between New York and San Francisco. They were living in San Francisco's Mission District when Daphne passed away, quietly at home, surrounded by her family. The cause was cancer. She was 52 years old.

Daphne is survived by her husband, the artist Brad Brown, as well as her parents, Costa and Greta Zepos, her sister, Amalia Zepou, and thousands of friends and fans in the world's cheese community.

Those who knew Daphne will deeply miss her passionate and outspoken love for traditional cheese and for life. Millions more who never met her will unknowingly taste the difference Daphne made. A revolutionary in both deed and spirit, it's fitting that Daphne died one day after the anniversary of the French Revolution and one day before the anniversary of the American.

Daphne served as a board member of the American Cheese Society and did formative work for as the Chairperson of the organization's Annual Judging. She was a co-founder of the Cheese of Choice Coalition, an advocacy group dedicated to the preservation of raw milk and artisan cheeses. From 2002 to 2005, she played a lead role in selecting and maturing more than 300 cheeses in Artisanal Premium Cheese Center's pioneering affinage cheese caves in Manhattan, established Artisanal’s Affinage Internship Program and, contributed to creating and running Artisanal’s Cheese Master Class program.

Over the last twenty years Daphne played a prominent role in nearly every major cheese event in the U.S. and Europe.   She lectured, moderated, and presented at the American Cheese Society's Annual Conference. She taught at Slow Food's bi-annual Cheese in Bra, Italy, at the College of Marin, and at courses throughout the country, including the Cheese School of San Francisco, Neal's Yard Dairy in London and at Zingerman's in Ann Arbor. Over the years, she has taught thousands of professional and avocational students, and, in the process, helped significantly improve the quality of cheese and the state of cheese mongering in this country. In 2006, Daphne founded the Essex Street Cheese Company, which imports a small selection of hand-selected cheeses from Europe. Together with her business partner, Kiri Fisher, Zepos and her husband Brad Brown purchased The Cheese School of San Francisco in 2011. It is the only independent institution of its kind in the U.S., dedicated to helping people enjoy and appreciate cheese through education and tasting events.

Most recently Daphne was the recipient of the 2012 American Cheese Society's Lifetime Achievement Award, for which she was, "recognized for a significant and lasting impact on the American cheese industry, and her demonstrated strength in building, supporting, and advancing the work of ACS and its members." Ari Weinzweig, co-founder and CEO of Zingerman’s Community of Businesses in Ann Arbor noted that “Daphne’s work to educate retailers, chefs, cheese mongers and cheese makers has contributed enormously to a huge improvement in the quality of the cheese on counters across the country. Her passion, the poetry of her cheese descriptions, her never-ending drive for better flavor, for teaching people what makes good cheese good, and for making already-good cheese even better is truly unrivaled.”

Throughout her years, Daphne's fierce love for life and learning, traveling, teaching and tasting were all hallmarks of who she was. She fit no one else's box and she always made her own mold. Unique, unselfish, unrelenting, unequalled in her passion for life, she will be remembered for her love for cheese and for the way she poetically shared her passions. Without question, the world is a far, far better, more flavorful, more fun place for having had Daphne in it. She will be missed.

At Daphne's request, donations can be sent to support ongoing education for cheese professionals. They can be made in Daphne’s memory through the American Cheese Education Foundation online at www.cheesefoundation.org, by mail to: ACE Foundation c/o American Cheese Society, 2696 S. Colorado Blvd., Suite 570, Denver, CO 80222, or by calling 720-328-2788 x300. 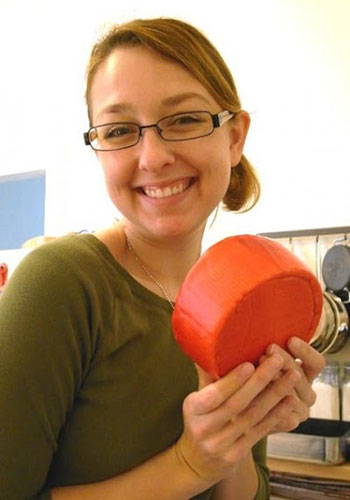 Stephanie Soleil, from San Francisco, seems to be a little bundle of energy (solar, of course)!

She and her equally energetic partner, Justin Watt took a year-long trip around the world a few years ago and they each documented it in their blogs, LaVieSoleil (hers) and Justinmania (his).

When she isn't traveling, Stephanie paints, teaches dance choreography and makes cheese. She's an artist and she perfectly illustrates our belief that making cheese is as much an art as a science.

She made her first Cheddar in 2009, and never looked back. Now, she's partial to the soft, creamy French cheeses like Crottin, Saint Marcellin, and Camembert, but, she has also made Jarlsberg and Cheddar. (In the picture at left, she is holding her first Cheddar.) 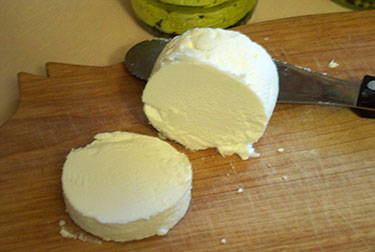 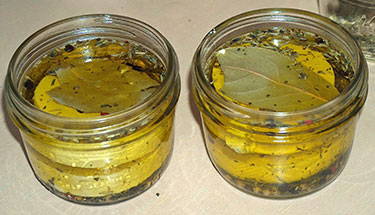 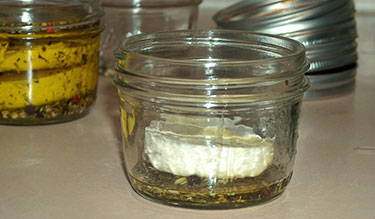 I met you last May when my husband and myself attended one of your cheese making workshops. At that point, I had been making cheese for a couple of years and really wanted to improve my technique as well as pick up pointers (and workshop helped with both).

Now this year, I have finally found a raw goat milk share!* And with this share, I can honestly say that I am making cheese at least once a week (you may have noticed an increase in the number of orders I have placed this year).

In the beginning, I was just interested in making cheese, but now I really feel as though I am appreciating the process, the equipment, and the history of cheese.

While I have always enjoyed making cow's milk cheese (I have a raw milk share), I am completely head-over-heels with goat's milk cheese. I am fascinated with the various cultures, molds, and processes for developing specific flavors and textures. Your website and monthly newsletters are a constant source of inspiration. Thank you.

I will send you some photos of my latest cabécou ** (shown above).

* This means she shares ownership of a goat with others and she is entitled to a portion of the milk the goat produces. Typically, that might be one gallon of milk for 40 weeks.

** Cabécou is a soft goat cheese that originated in the Midi-Pyrénées region of southern France. It can be eaten fresh and it's creamy, with a subtle, delicate taste of milk. 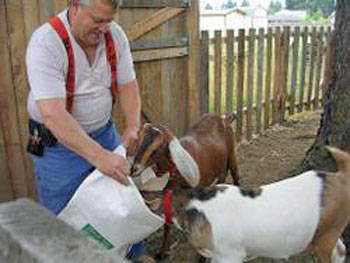 His own goat milk fudge!

I have a small hobby farm where I raise and milk Nubian goats. Another farm in Arizona (Black Mesa, Snowflake, AZ) sells a wonderful goat milk fudge. When I tried it, it set my brain whirring away (actually my brain does a lot of that on its own....) and I decided to come up with my own recipe.....This is what resulted.....

The recipe is actually modified from your Cream Cheese Chocolate Fudge on page 249 of Home Cheese Making. Instead of using cream cheese, however, I use your Queso Blanco (de Cabra) on page 93. Note that I use my mixer to do the 'creaming' and mixing, so it is more practical to at least double the recipe....

Also, up here in the Northwest, pecans are not grown, so I use walnuts.....The trick here is to toast them first. This adds a completely different flavor. So here goes.......

Ingredients:
1 cup Queso Blanco de Cabra crumbled  (Note: I usually use lemon juice instead of vinegar in my queso....If tends to be more forgiving in the taste if you overdo it....)
A couple of tablespoons of goat milk to soften the cheese
4 cups sifted confectioners' sugar
4 squares (1 oz ea) unsweetened chocolate, melted
1 cup chopped toasted walnuts
1/2 tsp vanilla
Pinch of salt ONLY if you haven't salted the cheese. Otherwise skip it.

Follow the mixing schedule for the Cream Cheese Chocolate Fudge, but use a mixer. Give each ingredient plenty of time to mix before adding the next item. This gives the mixture a chance to aerate. HOWEVER, fold the walnuts into the batter.

Instead of greasing a pan to chill the candy, line a pan with wax paper then spray with a little spray oil.On toasting walnuts: (I feel a bit foolish giving you these instructions. You probably know how better than I do, but just in case.....) Preheat your oven to 375F. Line a cookie sheet with aluminum foil then spray with spray oil. Spread the walnuts onto it. Toast for ten minutes. Sprinkle on salt. Let cool. This is important as it changes both the flavor and texture of the nuts.....Hope you enjoy this! 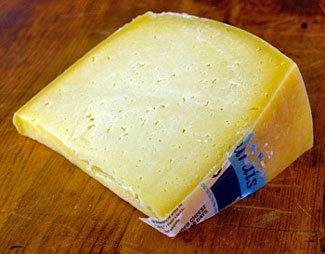 Purchased your book and loving it!! Has anyone come across a recipe for a Portuguese Saint Jorge cheese? It's tends to be hard and very sharp. Whitish in color.
Alva Mello, Hamilton, Montana

From Jim Wallace, our technical advisor - I have not researched the making of this cheese but have tasted it and it seems to be a full fat milk tomme style cheese of medium high moisture. Reminds me of a specific Tomme de Montagne I got when crossing the Alps into Italy from France - moist and buttery. I really think its all about the milk supply and quality.

If you have a recipe for Alva, please send it to Moosletter@cheesemaking.com