We are staking our claim as the biggest fans of this wonderful cheese!

We have been celebrating it since our book Home Cheese Making was first published in 1982, as "Cheesemaking Made Easy" with the recipe in it.

In 1997, Myriam Guidroz sent us a recipe for it and for Frozen Cream Cheese and we published it in an issue of the Cheesemakers' Journal.

In 2011, we posted a blog article illustrating the recipe in our book and sharing a recipe for Creole Cream Cheese Pound Cake.

Now, Jim has given us the most detailed recipe of all, including the fascinating history of this delightful cheese.

Can My Cheese be Pressed Longer

A. Since it is the final press phase, it should not be a problem. But, it is important to keep the schedule for the earlier pressings.

How to Care for Aging Blue Cheese

Q. My blue cheese has been aging for 2 weeks at 54F and the mold on the outside is growing like wildfire. There are lots of good open cragsthroughout, too. My question is whether to keep the exterior relatively clean by wiping it down with salt/vinegar solution/brushing or just let it go and scrape it clean in a month or two?

A. Usually the mold slows itself down due to the surface drying. But, if it is too heavy, reduce the moisture in the air. Some blues develop a very slimy surface which can be scraped but most blues dry down eventually to a crust.

The Underside of Cheese is Damp While Aging

Q. I just made two 2 lbs wheels of cheese. Everything went very well. I made 2 lbs of farmhouse cheddar and 2 lbs of stirred cheddar. I have had them drying for 4 days and I have turned them many times. (I heat my house using wood so it tends to be drier in my home.) I have had the cheese on wooden boards, but, every time I flip the cheese, it's slightly damp on the bottom. I feel like they're not getting any drier. I keep flipping the cheese, but it’s always slightly damp on the bottom side.

A. Normally the surface will begin to darken a bit when they are dry enough. This may take from 2-7 days, depending on the cheese.

If there seems to be moisture under the cheese, this is a sign that they have begun to re-ferment. It is called late acid development. This is caused by too much moisture left in the curds when the whey was drained.

This moisture contains lactose and food for the bacteria. In the future, make sure the curds are dry enough before draining the whey. To control this - cut them smaller and stir them longer. Make sure that the curds do not feel mushy or, when broken, show a lot of moisture inside. They should be about the same dryness from the edge of the curd to the center.

Q. I tried to make camblu and everything went fine except the surface molds which never grew at all. I bought the penicillium and geotrichum from you and I stored them properly and used them exactly as per the instructions.

I hydrated the molds with filtered water from my fridge dispenser. Could the chlorine have killed the molds or could the molds have been bad? Since I was using two molds it seems unlikely that both molds were bad, but I can't figure out what went wrong.

A. Chlorinated water is always a problem when working with molds and bacteria. Think about the fact that it is normally put in drinking water to kill things.

The other factor could be that the final cheese was dried too much for the mold to grow well. The aging space could also be too dry. Mold needs a good amount of moisture in order to thrive. 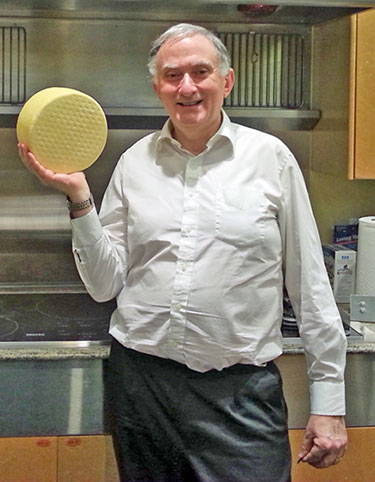 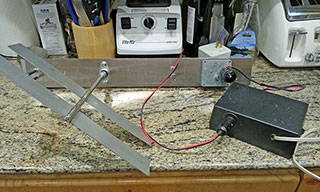 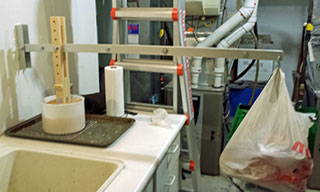 Roland Wilk definitely wasn't dressed in his "black and whites" when he made that Gouda he's holding at right! The evening he posed for that picture he was about to play his bassoon in a symphony orchestra.

We first heard from Roland when he entered our 35th Anniversary Essay Contest last year. He told us how he started making cheese for his grandchildren because they needed it to be Kosher. So far, he has made cheese for 6 out of 11 of his grandchildren.

When he was learning how to make cheese, Roland designed his own mechanical stirrer and a press that holds up to 300 pounds of weight (shown below). There is apparently no end to his creativity! 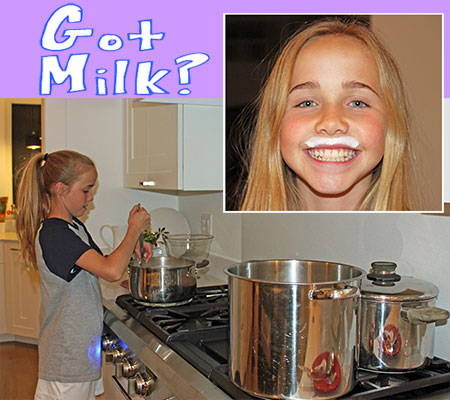 Emma is a 6th grader (12) who recently completed a fabulous science project. She then wrote to our technical advisor, Jim Wallace with questions about her results.

They were great questions about a great project, so we asked Emma for more information about it.

She sent us her work and we were amazed by it! We posted her conversation with Jim and her complete science project at our blog. 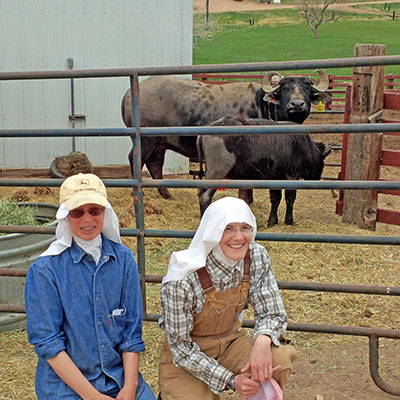 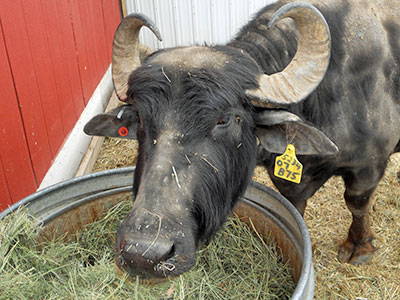 Water Buffalo at the Abbey

I wanted to send you a photo of our miracle buffalo. Yes indeed, they arrived last week - not one but two (though the second one is only 8 months old).

So far, they seem to be adjusting remarkably well - not ramming the panels of their pen with their horns or anything! Veronica (or Vee-Vee) is the full-grown one, and she is due to calve at the beginning of June. I am super excited!

I also had another surprising cheese blessing drop from the sky, which I can't resist sharing. One of the sisters in our community, Sister Pauline, is a former member of the community of Mont-Laurier, which anonymously published the book Goat Cheese: Small Scale Production.

That community, unfortunately, no longer exists. However, in July, Sister Pauline is receiving a visit from a friend of hers who also used to belong to Mont-Laurier - none other than the author of that book!

What an unexpected chance to learn a few things from a real expert! What are the odds??

Providential beams continue to shine down on my cheese endeavors. The only hitch is that she only speaks French, so Sister Pauline will have to translate! Both of them are around 80.

Anyway, I just wanted to share those little bits of news. Hope all is well in New England. Be grateful - we've had 15 inches of snow in the last 36 hours (fortunately the buffalo were raised in Wisconsin...)! 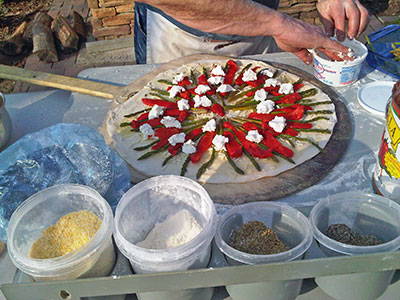 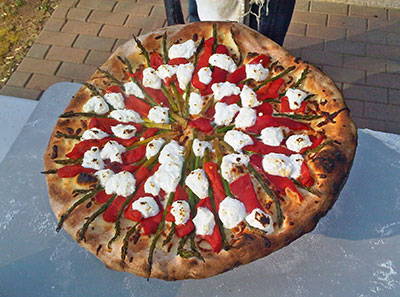 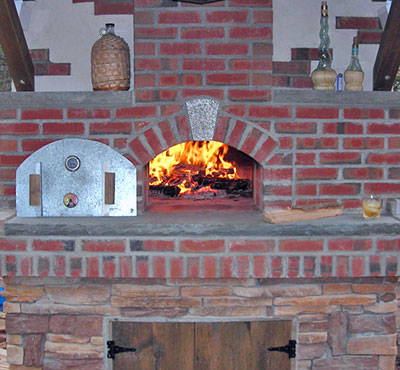 Making Mozzarella in Their Homemade Oven

A friend came over last Sunday and showed us how he made homemade mozzarella. He never buys store bought anymore.

The deal was - he brought the ingredients and showed us how to make it and we cooked him pizza in our brick oven. Got to say it was outstanding. Now I have to start making it.

He used the micro method, but I want to do more of a conventional hot water bath and salt.

An old timer we knew used to take ocean salt water that was sitting in a shallow rock and used that for his cheese and I got to tell you it was incredible. The perfect amount of salt to water.

My brother and I built the pizza oven from the ground up and, even though we were involved in building four homes, we never had so much fun building anything. Truly a labor of love. Having that vowel at the end of our names helps also. HaHa.

We make our own wine, grappa, sausage, we mushroom garden . . . the whole gambit. You can see how cheese is the perfect fit. Looking forward to my first solo cheese. 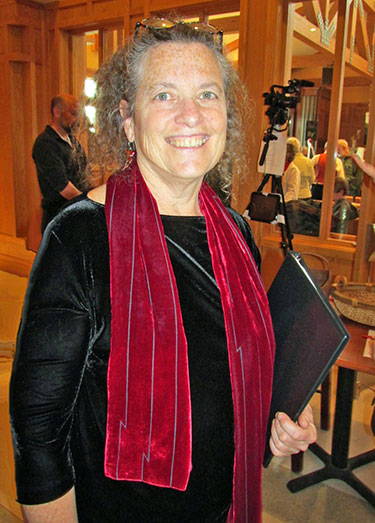 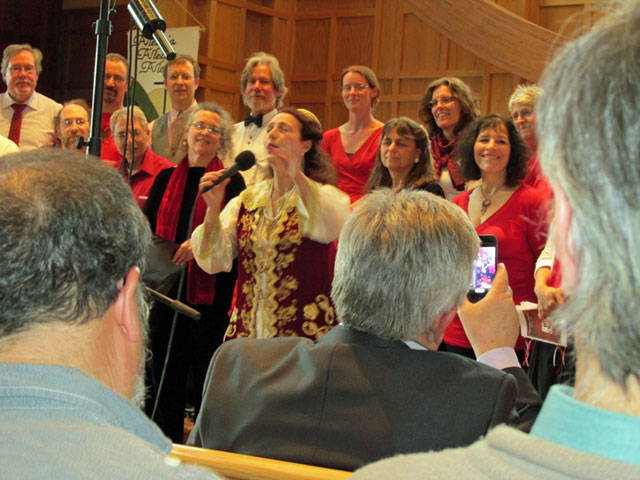 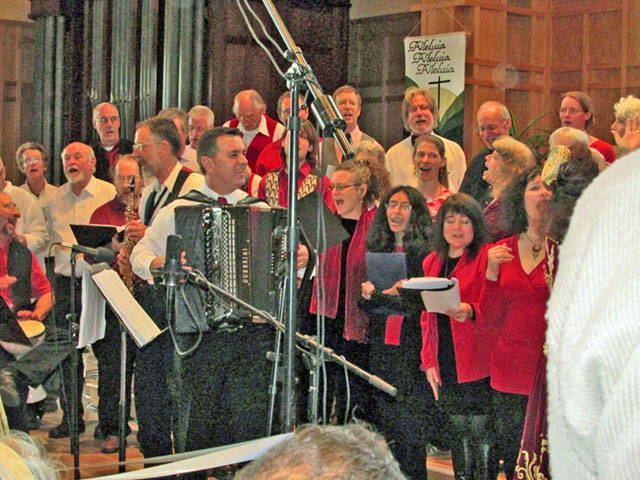 Another Whey to Change Our World

One way or another, Ricki works to bring cultures together. When she isn't teaching the differences between mesophilic and thermophilic cultures, she's singing songs from far away cultures. Cultural differences and similarities are an important theme to the Cheese Queen.

She sings in the Greenfield Harmony chorus, a 60 member group which performs music from all around the world. In their most recent performance, a famous married couple from Albania worked with the chorus and delighted the audience with their music.

Albania is a long whey from the Royal Palace in Ashfield, Massachusetts, but singing is like making cheese; good folks are doing it all over the world.

Ricki and the rest of the staff at NESC believe that the more we share our cultures with each other, the happier and more peaceful our world will be. 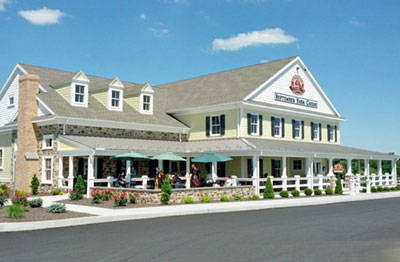 It All Began With a Kit!

Eight years ago I began making cheese in our kitchen with your cheese making kits and a press I purchased from you. We just finished writing our story for our web site and I thought of your company. I have the cheese press I purchased from you on display in our shop along with pictures of the first wheels of cheese we made. We would not be where we are today without your help. :) 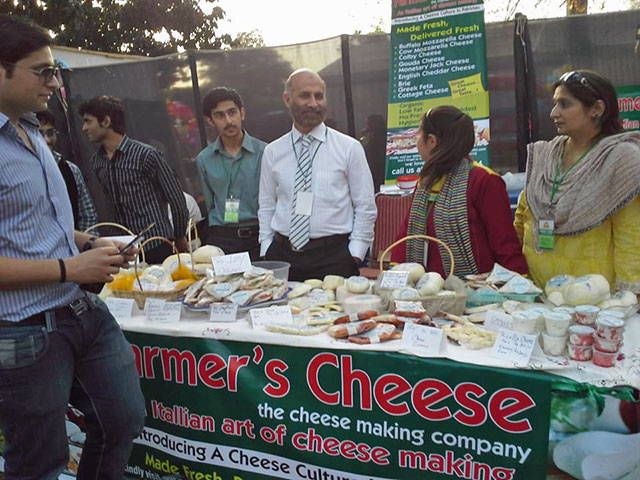 Note: Imran Saleh began making cheese two years ago and he has been sharing his progress with us (3 blog articles: Making Cheese in Pakistan, Teaching a Workshop in Pakistan, and Making "Dry" Mozzarella in Pakistan. This is his latest adventure:

So, now I am a bit of professional. We displayed a stall at an exhibition of organic food farmer's market and it was a great success. Apart from a big exposure to the public, almost all our cheeses were sold out, including buffalo mozzarella, ricotta, Brie, bocconcini, cow mozzarella, Monterey Jack and some flavored cheeses.

The recipes from New England Cheese Making Supply are really a pathway to the destination. When I make hard cheese, Jim's recipe is always open on my laptop. I love his recipes, although they are not commercial. But they give the whole chemistry about the specific cheese and, after some trials and errors, good cheese is produced. I buy some imported cheese to taste the difference and then try to do better next time. 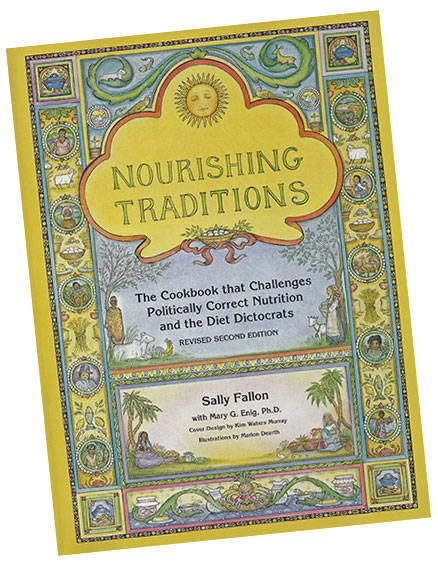 Sally Fallon is the co-founder of the Weston A. Price Foundation. She has dedicated her life to educating the world about the value of real milk and other healthy foods.

She has always objected to the concept of replacing these natural foods with lower fat, processed alternatives.

Studies have shown that these "food-like" substances cause inflammation in our bodies and this results in the chronic diseases found in "civilized" societies (like ours).

In her 674 page cookbook, she devotes the first 71 pages to information about fats, enzymes, food allergies, etc. This is followed by a collection of easy, healthy recipes using natural ingredients.