This is really the last word on one of the most popular dairy products in this country. And, yet, as Jim explains in his recipe, until 1947, it was considered a little too sour for most people to enjoy.

The turning point came when Dannon introduced their yogurt with strawberries in the bottom. It was now sweet enough for Americans to embrace, and the rest is yogurt history.

In his detailed recipe, Jim includes directions for making both "stirred" yogurt and "drinkable" yogurt, as well as some unique (mouth watering) variations like "mango-banana-lime" and "cardamom." 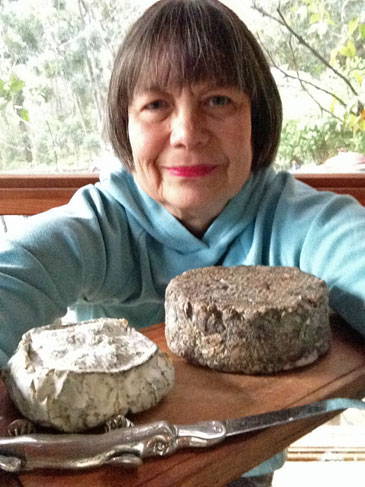 Jan Hawkins with her Camblu 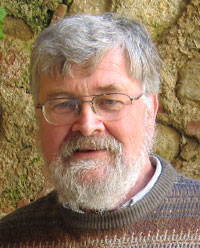 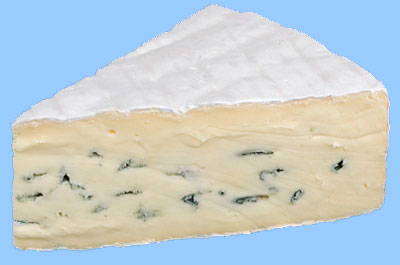 We are on 15 acres in the Aussie "bush," 70 km (43 miles) from Sydney. The Macdonald Valley is in a historic area where the original transported convicts, through blood, sweat and tears, created a road to the north.

It is dissected by the Macdonald River, where original market gardens supplied the new colony until a couple of consecutive huge floods made it non-viable. Our wildlife is amazing with a myriad of bird species, wallabies and even the odd Koala! Descendants of the early families still farm here and I am lucky enough to have fresh milk on hand for cheese making.

I have managed to get others in the valley inspired to attempt cheese making and have run demonstrations over the last couple of years to benefit a local community group. The dream is someday to get a cheese co-op up and running!

I am a huge fan of Jim's Camblu.

I have made it twice now, both with differing but delicious results.

The first was more rustic in appearance with hardly any white mould cover, more of a mottled blue/washed rind appearance), but a fabulous flavor at three months of age.

The second Camblu did develop the white mould cover all over and at 6 weeks now, looks and tastes great and I am trying to hang onto one to taste at three months!!

The difference in the second one is that I introduced the p. Roquefort in liquid form (had run out of the powder form) along with a few grains of saccharomyces (yeast) immediately after stirring in the culture.

The blue mould did not seem to then take over the entire surface of the cheese as it did in my first attempt when the blue mould was sprinkled over layers in the moulding stage. I shall try both methods again to see if a definite pattern emerges! Many thanks indeed . . . a most interesting and challenging cheese.

Jim's answer:
Glad to see that this worked out so well for you. I have made them so that the surface comes out snow white but also with the wild mixed mold surface. My preference does go to the wild side and I think it has more interesting flavors. For sale, though, this would scare off the uninitiated.

This cheese can go in a lot of directions from the snow white to the dark rustics to even the moist washed rinds. It all depends on what you want here. This all depends on inoculations, moisture and what happens in the cave. 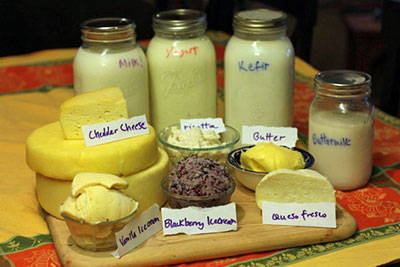 We have a sweet Jersey cow, Georgia, who is currently giving us 3 gallons of milk a day in addition to feeding her 2 month old calf. We are working hard to put the milk to good use.

I thought you might appreciate this photo. I ordered more supplies yesterday. I'm going to start trying some different kinds of cheeses. It's been fun! 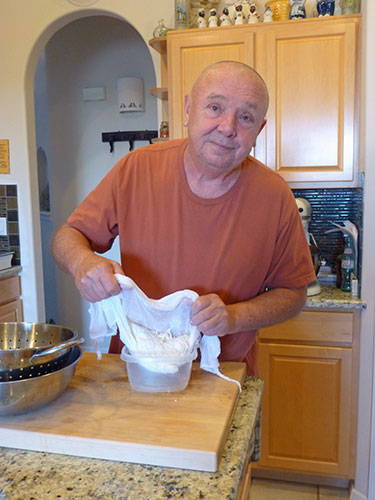 I have been making Quark for some time using your cultures. My home's ambient temperature of 78 - 80F during the summer has always caused an over-acidic problem with my Quark. I have made many adjustments to your online recipe to get acceptable results under my conditions.

I recently purchased your Soft Cheese Sample Pack. Using your Fromagina culture (C31) and my adjusted recipe, I have repeatedly produced the best Quark that my wife and I have had outside of Germany.

I place 1% milk fat milk from the store in my pot at 38F out of the fridge. I add 1/4 teaspoon calcium chloridemixed in a 1/4 cup water and then sprinkle the C31 culture on the cold milk.

I let it sit for 2 minutes and stir for one minute, cover the pot and let sit for 14 hours at 78 - 80F. I cut the curd at one inch, vertically only, and remove the curd with a flat ladle at approximate one inch levels into my waiting butter muslin lined colander. I drain the curds for 2 to 3 hours at 78 - 80F and turn the resulting cheese into a container to refrigerate.

I make a batch about every five days and have for breakfast almost every day with fresh fruit. My wife likes it on toast or rolls with homemade jam. It is absolutely wonderful.

For those who don't know the following:
When the great tsunami hit Thailand and other countries, we were hurting for rubber coated gloves to dig for the living and to recover the dead and to handle in the morgue. But, there were none to be found in Thailand.

Ricki was kind enough to send me a big supply that she paid for out of her own pocket. I distributed the gloves to people both on and off the island who needed them. They were appreciated very much. I shall never forget Ricki's kindness and help. I recommend her products to everyone that I meet. I have used them for years and they are always the best. 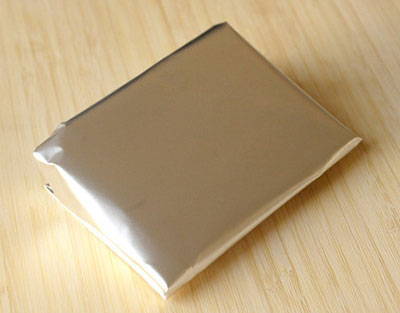 This is our official "best way" to store cheese, because it has waxed paper on the inside and foil on the outside.

The waxed paper maintains contact with the cheese without effecting the flavor and chemistry of it (as plastic wrap will do). The foil keeps the cheese from drying out.

This is the perfect wrap to use if you are giving cheeses as holiday gifts. It also makes a great gift for your favorite foodie. (You might even teach them something they didn't know about cheese storage!)