Happy Spring! This month's recipe for April is a great cheese for the warming weather. It is a Feta style cheese (we emphasize "style" because you cannot call it Feta Cheese any more) originating in Bulgaria. Jim has included a bit of information about cheese politics in this recipe.

This is a cross between what we know of as Feta and a semi-ripe Camembert. It doesn't crumble like the Feta we normally see, so it needs to be cut. Jim's wife, Robin made a salad with this cheese and avocado the other night and Jim told us that the creamy texture of the avocado melded perfectly with the salty, creamy texture of the cheese. So, he said that as long as she's willing to make that salad, he's willing to make this cheese! 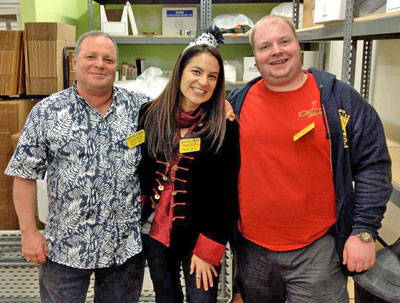 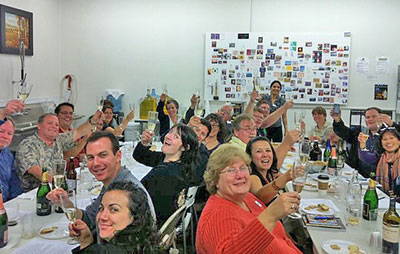 We've never featured a club before in this section - it's always been one individual. But, we think the concept of cheese clubs for home cheese makers is so cool that we decided to make an exception this month.

The goal of a club is to provide a means for home cheese makers (and enthusiasts) to meet, share and learn from each other. The officers of Queso Diego have done a terrific job at this.

And, thanks to the way they share their experiences, it's not that hard for you to start your own club. Ringo Firefly, the Vice President of Queso Diego wrote an article for Culture Magazine with detailed instructions on how to go about it.

We highly recommend that you start your own club and you'll know why when you see more pictures of this club's activities at our blog. They have really got it together and they really are fabulous!

By the way, if you already have a club, add it to the list we have started in our Classified Ads. 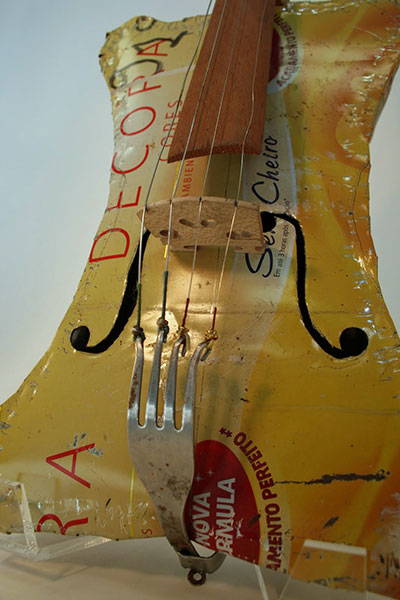 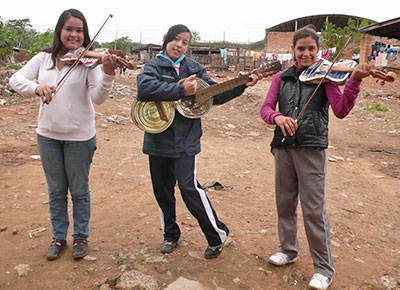 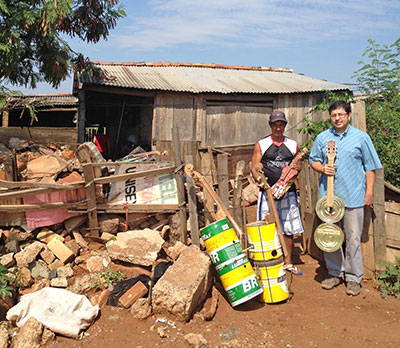 RICKI'S WARNING: Reading about this may bring tears to your eyes.

As you may know, our Cheese Queen sings in a Village Harmony chorus and she and her King (Jamie) host singing weekends and concerts at their home in Ashfield, Massachusetts. You can now register for these online. Ricki and Jamie both consider music to be an important feature of their lives in the Royal Kingdom.

At a rehearsal recently, one of her fellow chorus members told Ricki about an orchestra in Paraguay composed of young people playing instruments made from recycled trash. The Queen went home and looked it up on the Royal Computer.

Sure enough, there is such an orchestra in Catuera, Paraguay (a poor village located virtually on top of a landfill). 1500 pounds of trash are dumped there daily and there are 2500 families living right next to it. Because of the poverty in the village, many of the children work at the landfill as "recyclers" instead of attending school.

A technician at the landfill, Favio Chavez (at right in the picture to the right) found this situation depressing and he decided to use his personal instruments to teach some of the children music. He quickly ran out of instruments, so he enlisted Nicolas (Cola) Gomez (at left) to make some from the trash in the landfill.

These two amazing men have changed the lives of many of the children of Catuera and we think their story needs to be told. There is a campaign at Kickstarter.com to raise money for a documentary film about the orchestra. As of April 1st, they have raised less than $22,000 of the $175,000 they need to complete the film.

If the film is released, there will be an outreach program for the children including presentations by the Recycled Orchestra and educational workshops all over the world. However, at this point, they have not raised nearly enough to complete the film.

If you have an instrument to donate, you may send it to: 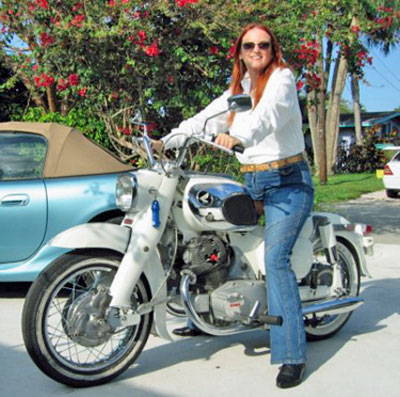 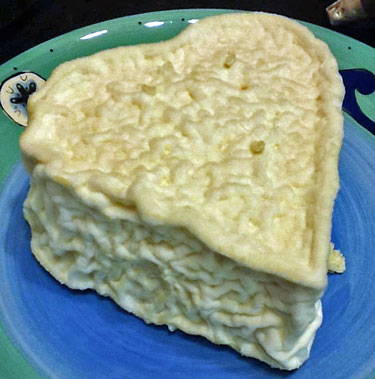 I was so amazed at the flavor, texture and sight of Vermont Creamery's Bonne Bouche, that I have decided to try to make my own version. I'm going to call it "Baaa-Bouche!"

I'm using half cow and half goat milks, both raw. I'm using as my "base" recipe the recipe on your site for the "Saint Maure de Touraine" as it looks the closest to what I'm looking for. I'll finish it off with a small amount of vegetable ash, and hopefully get the results I'm looking for.

Also, today, I am making Gorgonzola Dolce, again, from your recipes pages.

I made another batch of the Provolone last night. I can tell this ones going to be even better than the last one!

(A few words about Louise: She recently won Grand Prize in a pairing contest at Culture magazine with her combination of Bonne Bouche and her own Red Onion Marmalade. See her winning entry.

She is also starting a cheese club in Broward County, Florida and she would love to hear from anyone in the area who might be interested. 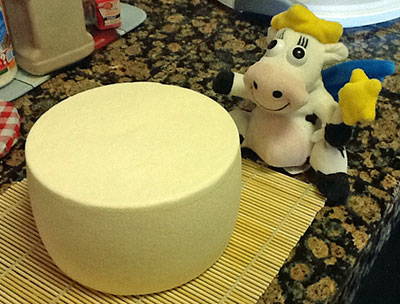 This is my Colby Jack.
Receiving it's blessing. 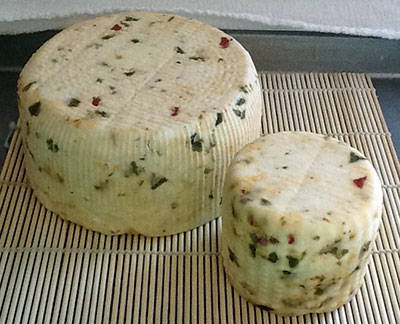 Pepper Jack just prior to waxing.

She Just Started in February!

This is my latest cheese, Jarlsburg, receiving it's blessing from the cheese fairy.

I received my first kit in February, and this is my ninth cheese. It is also the prettiest.

Thanks for my new hobby, 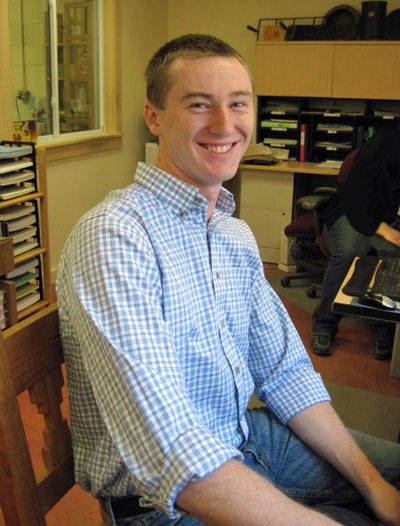 All in the Family!

This month, "Sarah's Special" is actually her husband, Mark Chrabascz who has just joined our staff. Mark is a mechanical engineer, so he'll be helping us figure out how to improve our production.   As you know, we get the orders out to you "lickety-split," but the time it takes to prepare some of those orders isn't quite so "lickety-split!"

Now that Mark's on board, we are even more of a "family business" than we were. The Cheese Queen's husband, Jamie makes our presses. Her daughter, Sarah is our marketing manager. Her other daughter, Jen helps at workshops and works in the office part-time.

In addition to the Royal Family, our Cheermeister and employee of 17 years, Kathy Conley has become part of our family along with her mother, Ida and her daughter April. 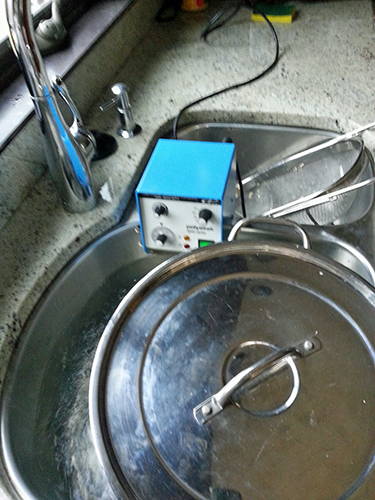 My solution to keeping my curds at the right temperature ...

It's crowded, but my sink is just large enough for a lobster pot (of soon to be cheese) and a Cole-Palmer water bath heater that I purchased used on eBay for $60.

Now I can keep the precise temperature and even get a slow rise between cutting the curd and draining the whey. 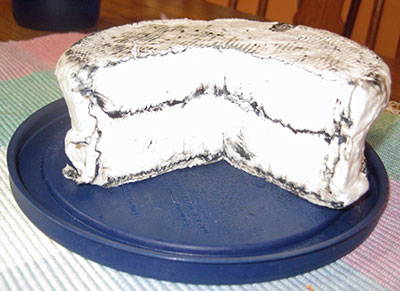 Love That Beautiful Streak of Ash!

Attached is a picture of my Goat Cheese with Ash. Yummy.

(He's referring to pictures of Ricki and Sarah's vacation in Culebra in the March issue.)